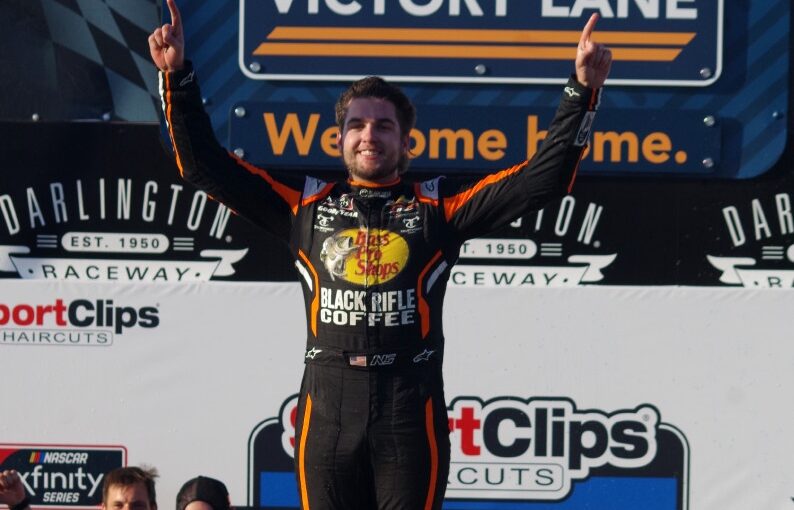 Fresh from the announcement of his return to JR Motorsports next year, Noah Gragson sped to victory at Darlington Raceway on Saturday, clinching a spot in the NASCAR Xfinity Series Playoffs.

After pre-race favorite Denny Hamlin was sent to the rear under penalty for an equipment violation during a pit stop under caution on Lap 139, Gragson grabbed the lead from Daniel Hemric on Lap 143 and held it the rest of the way.

Gragson’s victory in the Sport Clips Haircuts VFW Help a Hero 200 at the 1.366-mile speedway was his first of the season, his first at Darlington and the third of his career.

After debris from a Hemric spin on Lap 144 caused the eighth caution of the afternoon and sent the race to overtime, Gragson surged ahead on the final restart and finished .218 seconds ahead of runner-up Harrison Burton.

Reigning series champion Austin Cindric ran third, closing to a single point his deficit to current series leader AJ Allmendinger, who finished 20th after pitting under the final caution because of a loose wheel.

“It’s been way too long,” said Gragson, who celebrated by climbing the frontstretch catchfence with his team after climbing from his car. “I hate that the 54 (Hamlin) … something happened to him on pit road. It was pretty fun racing there.

“We made good adjustments on the pit stops … And like you said, it’s been way too long. A lot of frustration this year, and things haven’t gone our way, but we’re getting some momentum when we need to, and I just can’t thank everybody enough on this No. 9 team.”

Hamlin appeared headed for his sixth Xfinity Series victory at Darlington when Brandon Jones spun off Turn 4 on Lap 138 of a scheduled 147. On the ensuing pit stop for new tires, Hamlin’s crew was penalized for bringing equipment over the wall too soon, ending the driver’s chances for a win.

Gragson took the checkered flag on Lap 152 at the end of the only overtime attempt. The victory marked his fifth straight finish of seventh or better.

Cindric took advantage of Allmendinger’s late issue to set up a tight battle for the regular-season championship with two races left before the 12-driver Playoff field is set.

“We did a solid job all day trying to execute but we weren’t perfect,” Cindric said. “I’m proud of what we gained today with the Snap-On Ford Mustang. It’s definitely the best race I feel like I’ve had at Darlington, just having the strength and not having too many weaknesses.

“As a team, that takes a lot of conversations throughout the week to try to get that right, so we righted a lot of wrongs for me at this race track today. I feel good about that.”

There were eight cautions for a total of 41 laps and 19 lead changes among eight drivers. Hamlin, who finished 12th, led a race-high 43 laps. Gragson was out front for 40 circuits.

According to Cindric, the fresh strip of pavement in Turn 2 seemed to gain grip throughout the race but did not play a significant role in the outcome.