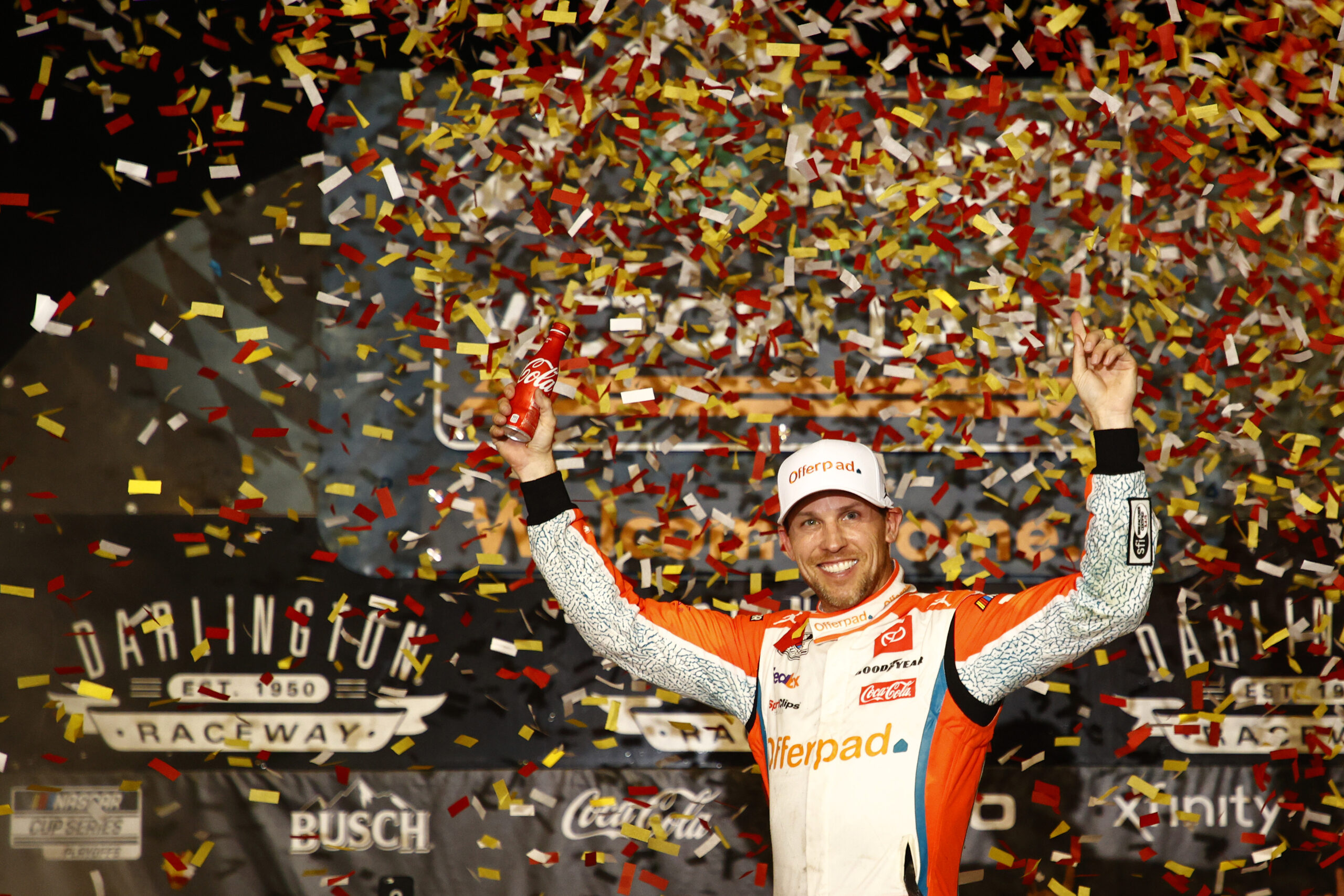 DARLINGTON, S.C. – Holding off regular-season champion Kyle Larson throughout a thrilling final green-flag run in Sunday’s Cook Out Southern 500 at Darlington Raceway, Denny Hamlin is winless in 2021 no more.

Hamlin maintained control of his No. 11 Joe Gibbs Racing Toyota as Larson buried his No. 5 Chevrolet into Turns 3 and 4 on the final lap. Larson gave Hamlin a tap, but Hamlin blocked the top lane and got to the finish line .212 seconds ahead of the runner-up.

“He drove it in past the limit of the car and tires,” Hamlin said of Larson’s banzai charge. “I knew he was coming. I was a little conservative on that last lap because I had that four-car-length lead.”

The victory was Hamlin’s first of the year after a winless 26-race regular season. He won for the fourth time at Darlington and for the 45th time in his career to earn an automatic berth into the Round of 12 in the NASCAR Cup Series Playoffs.

“Yeah, it was a matter of time,” Hamlin said of the long-awaited win. “We can’t just keep leading inside 10 laps to go every week and not get a win.”

Hamlin kept Larson at bay over the final two restarts but couldn’t pull away to a comfortable lead.

“We got to the white (flag), and I was like, ‘Well, I haven’t been able to gain on him now, I’m going to try something,’” Larson said of the desperation try he labeled a “video-game move.” “Honestly, got to his bumper too quick. I was hoping he was going to run that diamond to kind of be safe and I could skirt to his outside, but gave everything I had.

“I didn’t want to wreck him. I just wanted to try to get to his outside there, but he did a great job not really making any mistakes during the last run, and I was having to push really hard in second to try and just stay with him.”

Hamlin and Martin Truex Jr. caught a break when Ryan Blaney spun in Turn 4 on Lap 318 while the two JGR drivers stayed on the track trying to stretch the cycle of pit stops. Truex beat Hamlin off pit road but was flagged for speeding, and Hamlin held the top spot the rest of the way.

Two-time series champion Kyle Busch suffered an early exit and a blow to his hopes of winning a third title. Contact with the No. 3 Chevrolet of Austin Dillon sent Busch’s No. 18 Toyota rocketing into the outside wall in Turn 2, causing irreparable damage.

Busch fell out in 35th place and now faces an uphill battle to advance to the Round of 12.

“It wasn’t the 3’s (Dillon’s) fault,” Busch said. “Just take our lumps, you know. We were running like (crap), and that’s what you get when you run like (crap). Shouldn’t be there.”

Three-fourths of the Hendrick Motorsports armada took a major hit as well. Alex Bowman scraped the wall on Lap 14 and stayed on the track, hoping to make it to the competition caution on lap 25. But a tire rub proved disastrous, sending Bowman’s Chevy into the Turn 4 wall, and damage the No. 24 Camaro of teammate William Byron in the process.

Bowman was able to continue and finished 26th, but Byron wasn’t as fortunate. After recovering to run in the top 10, Byron cut a left front tire on Lap 200, crashed hard into the Turn 1 wall and exited the race with a 34th-place finish.

“There was nothing we could do. The guys did an awesome job to fix it. We were running like top-12, I think, even with all the (earlier) right rear damage, and it’s just terrible. I don’t know, man. That sucks.”

Reigning series champion Chase Elliott fell out in 31st place after slamming the outside wall on Lap 327 in a three-wide melee in Turn 1 with Bubba Wallace and Christopher Bell.

An early wreck put a dagger to Michael McDowell’s slim championship chances. On Lap 31, McDowell’s No. 34 Front Row Motorsports Ford broke loose behind Erik Jones’ Chevrolet in Turn 2, smacked the outside wall and careened nose-first into the inside SAFER barrier.

McDowell exited the race, his car destroyed and his title hopes hanging by a thread.

“The 43 (Jones) kind of got everybody jammed up,” McDowell said after exiting the infield care center. “I think he started on the front there without tires, which is a tough spot to be in, and I just went three-wide underneath him and just got into the patch (of new asphalt in Turn 2) with my left sides just a little bit low.

“I got loose enough into the wall and that was about it. I’ll have to see the replay, but just heartbreaking for everybody on this Front Row team. We had high hopes coming into the Playoffs and this is not how we wanted to start it.”

Bowman, Busch, Byron and McDowell fell below the current cut line for the Round of 12. Elliott leaves Darlington 10th in the Playoff standings.