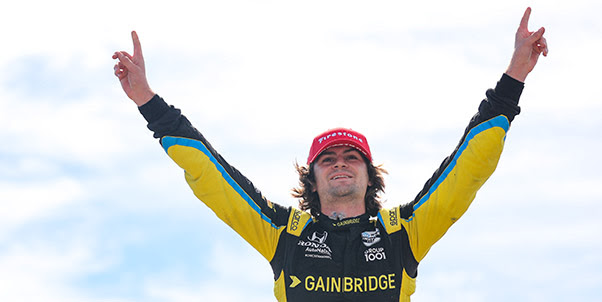 MONTEREY, Calif. (Sunday, Sept. 19, 2021) – Colton Herta continued his family’s success at WeatherTech Raceway Laguna Seca with a dominant victory Sunday in the Firestone Grand Prix of Monterey, while Alex Palou marched closer and closer to an even bigger win.

Herta earned his second victory this season and fifth career victory, beating Palou’s No. 10 NTT Data Honda to the finish by 1.9747 seconds. NTT P1 Award winner Herta led 91 of the 95 laps in the No. 26 Gainbridge Honda.

California native Herta also won this event from the pole the last time it took place, in 2019 in his only other start here. This race was canceled last year due to the COVID-19 pandemic. Herta’s father and race strategist, Bryan Herta, won this race as a driver from the pole in 1998 and 1999.

“I enjoy racing here so much,” Herta said. “It’s an amazing track for me and my family. It’s been so good to us. To go two-for-two so far (at Laguna Seca) is great. We were fast all weekend, and I’m glad we could pull it off in the race.”

Spaniard Palou pulled 35 points ahead of Pato O’Ward in the NTT INDYCAR SERIES standings with just one race remaining, the Acura Grand Prix of Long Beach this Sunday at Long Beach, California. Palou must finish 11th or better at Long Beach to earn his first title in his second season in the series.

“We didn’t have it today for the win, but we did the most we could,” Palou said. “I was trying, but it was tough. It was Herta’s day today. I’m happy with P2.”

Palou, O’Ward and two-time series champion Josef Newgarden are the only drivers eligible to win the Astor Challenge Cup at the season finale. Newgarden is third in the standings, 48 points back. Six-time series champion Scott Dixon and Chip Ganassi Racing teammate Marcus Ericsson were eliminated from contention at this race after finishing 13th and sixth, respectively.

This will be the 16th consecutive season in which the NTT INDYCAR SERIES title race will be decided at the final race of the season.

Romain Grosjean finished third today in the No. 51 Nurtec ODT Honda after a stirring late-race charge past rivals and lapped traffic in which he sliced between one to two seconds per lap from Herta and Palou. Grosjean’s third podium finish of the season helped him stay alive in the race for Rookie of the Year honors, as he trails Scott McLaughlin by 20 points.

Grosjean was 10 seconds behind Herta with nine laps remaining but closed to within 3.7087 seconds at the finish after some deft driving, including a wheel-banging, side-by-side duel to lap Jimmie Johnson in the famous “Corkscrew” turn with seven laps remaining. Series rookie Johnson was hip-checked off the track by Grosjean but returned to the racing surface to finish a season-best 17th in the No. 48 Carvana Honda fielded by Chip Ganassi Racing.

“The last stint was very fun because we were on new tires and fresher than everyone else,” Grosjean said. “So, that was exciting. It’s been a great day. Sorry to Jimmie for the contact out there. He was trying to protect Alex (Palou, teammate), and I wanted to go chase Alex.

Graham Rahal finished fourth in the No. 15 United Rentals Honda, with O’Ward rounding out the top five in the No. 5 Arrow McLaren SP Chevrolet.

“All weekend we didn’t have it,” O’Ward said. “I truly feel like we used every single ounce of energy and pace that this car had. We pulled off a near-miracle in qualifying to start in the first three rows. In the race, honestly, that was as much as I had.

“All we can do at Long Beach is win, and then let everything else fall. I’ve got faith in myself. I know I’m pretty handy around a street course, so let’s see what we can pull off next week.”

Herta’s path to victory become much clearer on Lap 2 of the 95-lap race, ironically after he made a mistake. Herta went wide in Turn 4, opening the door for fellow front-row starter and Andretti Autosport teammate Alexander Rossi in Turn 5.

Rossi and Herta banged wheels while side-by-side in Turn 5, and Rossi’s No. 27 NAPA AUTO PARTS/AutoNation Honda then spun into the gravel and stalled. Rossi’s car was refired, but he finished 25th, two laps down.

After that incident, teams unfolded varying tire and fuel strategies trying to undercut or overcut Herta’s lead. None worked, as Herta’s speed and consistency were too much.

The only time Herta didn’t lead the race came when Grosjean was at the front on Lap 19 and from Laps 69-71 during pit cycles.

Palou kept the race close around the midway point, pulling to within one second of Herta as both drivers’ Firestone tires wore during a stint. But Herta had extended his lead to 5.4 seconds by Lap 75.

“There was always pressure there from Alex behind me,” Herta said. “Even at the beginning of the stints when I was a little bit better, he was still there. And he closed it back up at the end of the stints. I think he was a little better that time.

“I’m just happy to have done it. This place is so awesome – it’s my favorite track in North America by far. To win here means so much.”

About the only drama for Herta over the closing laps came with 14 laps remaining when he couldn’t avoid what appeared to be a rabbit or a squirrel running across the track. But the wildlife collision did no damage to his machine, and he marched home to victory.

Grosjean’s charge kept the race lively over the closing laps. It appeared with 10 laps to go the Frenchman may have been able to shave enough time per lap to pass Palou and possibly catch Herta for the win. But traffic and tire wear blunted that effort, and Grosjean ended up 1.734 seconds behind Palou.

While the Drivers’ Championship will go to the wire at Long Beach, Honda today clinched the Manufacturers Award for the fourth consecutive season. 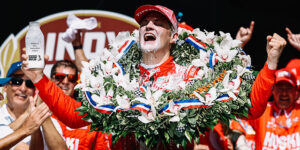 May 30, 2022
Lundqvist Conquers Mixed Conditions To Win at IMS 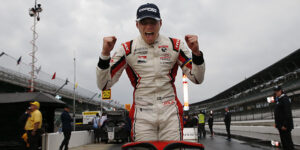 May 15, 2022
O’Ward Tunes Out Distractions, Powers to Barber Victory 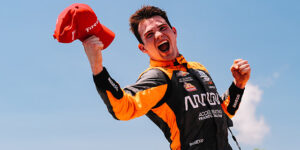