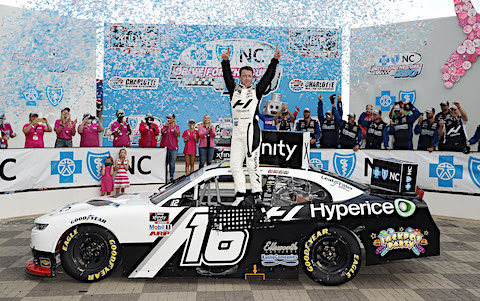 CONCORD, N.C. (Oct. 8, 2021) – A.J. Allmendinger saved his best for last in Saturday’s Drive for the Cure 250 presented by Blue Cross Blue Shield of North Carolina at the Charlotte Motor Speedway ROVAL™. Allmendinger saw a nine-second lead evaporate with four laps to go, when Tommy Joe Martins crashed – but the cagey veteran Allmendinger withstood a late restart to reign triumphant in the NASCAR Xfinity Series’ cutoff race in the Playoffs’ Round of 12.

Allmendinger’s win was his fifth of the season and the 10th of his Xfinity Series career. The Kaulig Racing pilot became the first driver to win the same Charlotte Xfinity Series race in three consecutive years.

Hemric, a native of nearby Kannapolis, North Carolina, won Stages 1 and 2. Cindric started from the pole and led a race-high 22 laps.

Snider, Jeb Burton, Riley Herbst and Jeremy Clements were eliminated from the Playoffs.

A.J. ALLMENDINGER, No. 16 Hyperice Chevrolet (Race Winner): “It’s special, for sure, to win this race three years in a row and for it to be Drive for the Cure 250. The celebration, seeing the women in victory lane who’ve survived breast cancer makes it all the more special. For me, what means the most is to be able to represent them and it reminds me that we’re just out here racing cars. What they represent is bigger than racing. Today, I was nervous. We had a good points gap, but Talladega showed that anything can happen. We were deciding whether to go for points or go for the win. Once we decided that, our Hyperice Chevy was so good out front. I’m just pumped up to be able to get another win.”

AUSTIN CINDRIC, No. 22 Menards/Richmond Ford (Runner-Up): “I feel like this has honestly one of my weakest road courses. I felt like I was driving a skid pad car after about 10 laps. I feel a bit lucky and a bit fortunate that I didn’t get moved or put in the wall. Either way, we had a fast car, set a fast lap time and got a good finish. It sets us up well for Texas, but I wish we could’ve taken advantage and gotten a Playoff point.”

DANIEL HEMRIC, No. 18 Poppy Bank Toyota (Third-Place Finisher): “We advanced further than we could’ve hoped for (by pitting with four laps to go). It was a great call by (crew chief) Dave Rogers. We were going to run fourth or sixth. I’d lost my rear tires trying to get back through the field. We gave ourselves a shot. That’s all you can ask for.”