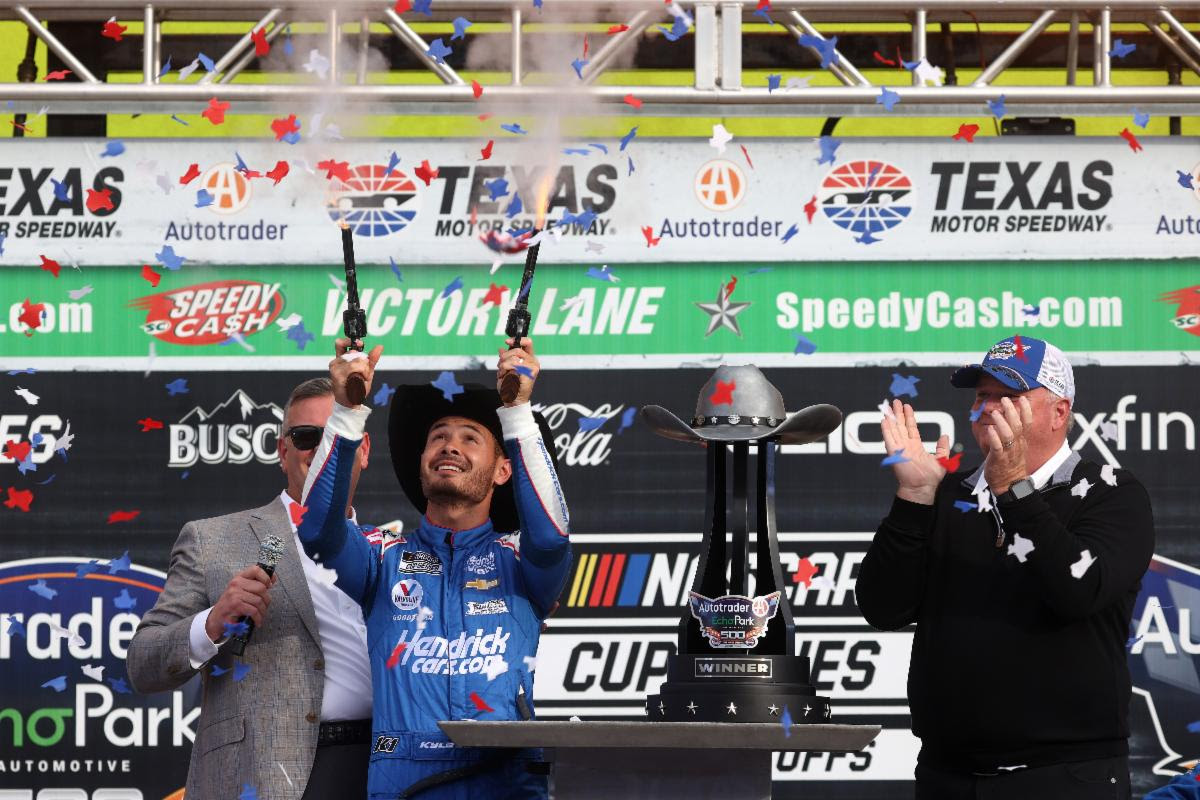 Larson led a race-high 256 of the 334 laps en route to the win in the NASCAR Playoffs Round of 8 opener that gives him an automatic berth in the Championship 4 race at Phoenix Raceway on Sunday, Nov. 7, that determines the series champion.

Larson, the regular-season series champion, has been equally strong in the playoffs with Sunday’s win being his third in seven post-season races. Despite the dominance, it wasn’t a breeze as Larson had to survive seven Stage 3 restarts, including one with two laps remaining, to secure the win by holding off his Hendrick Motorsports teammate William Byron by .459 of a second. Christopher Bell of Joe Gibbs Racing came back from two laps down to finish third.

It was Larson’s series-leading eighth victory on the season and also gave him the season sweep at Texas Motor Speedway. In June, he collected $1 million for winning the NASCAR All-Star Race.

In addition to Larson, four other Round of 8 playoff drivers finished among the top 10. Team Penske driver Brad Keselowski finished fourth with teammate Ryan Blaney, Hendrick Motorsports’ Chase Elliott and Joe Gibbs Racing’s Kyle Busch finishing sixth through eighth, respectively. Larson led the way with 18 stage points, including a win in Stage 2, and was followed by Blaney (17) and Busch (11), who was the Stage 1 winner.

Denny Hamlin of Joe Gibbs Racing managed to finish 11th after recovering from a cut tire that led to a single-car spin followed by sustaining front-end damage after getting caught up in an incident between Chris Buescher and Chase Briscoe. All that chaos came in the final 20 laps and dashed his hopes of a potential top-five finish.

Joey Logano of Team Penske and Martin Truex Jr. of Joe Gibbs Racing weren’t as lucky as Hamlin in overcoming their late-race misfortunes and salvaging their days. Logano had an engine issue that forced him to retire with 36 laps remaining and resulted in a 30th-place finish.

Next up was Truex Jr., who brought out the 10th of 11 cautions with 14 to go when contact by Daniel Suarez sent him hard into the Turn 3 wall. The damage was unrepairable and Truex Jr. would sink to 25th.

The final caution, a result of the Buescher-Briscoe incident, would lead to a restart with two laps remaining and a final opportunity for someone to overtake Larson for the upset victory. Byron restarted second and Keselowski third and both took runs at Larson but didn’t have enough to overtake him.

“The track position was important for us,” Larson said. “We were able to pretty much lead the whole race – which was great and to stay ahead of that mess – but to fight through a lot of those restarts at the end, try to get the best pushes we could. We were able to just time it out right and get clear into (Turn) 1 every time.”

MORE INFO:
Keep track of all of Texas Motor Speedway’s events by following on Facebook, Twitter and Instagram. Keep up with all the latest news and information on the speedway website and TMS mobile app.

About Texas Motor Speedway:
Texas Motor Speedway is among the largest sports stadiums in the United States and features an array of amenities such as the world’s largest TV that make it one of the premier venues in the world of sports. The 1.5-mile superspeedway located in Fort Worth hosts all three NASCAR national series as well as the NTT IndyCar Series among its various races and specialty events throughout the year. Since opening in 1997, Texas Motor Speedway has generated an annual economic impact of approximately $300 million to the North Texas region. Texas Motor Speedway is owned and operated by Speedway Motorsports, LLC, a leading marketer and promoter of motorsports entertainment in the United States. For more information, please visit texasmotorspeedway.com.