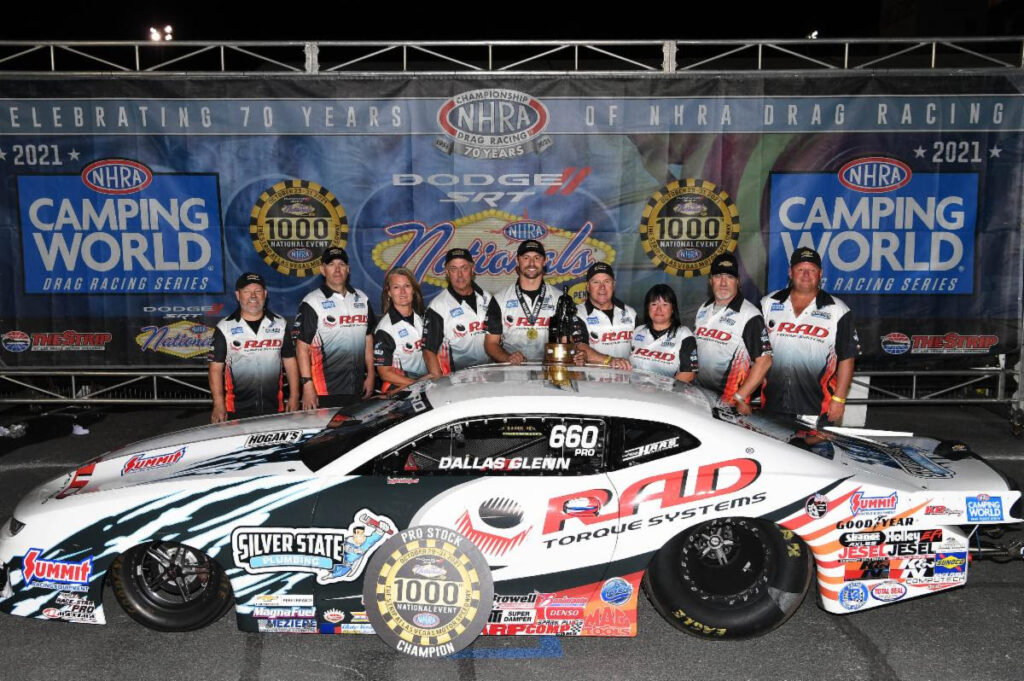 Little did the youth from Covington, Washington, know that he would one day be on the main stage. From racing quarter midgets on circle tracks when he was 6 years old to driving his grandmother’s ’68 Chevrolet El Camino at local dragstrips, Glenn found success in a hobby shared by his family.

“My dad won the local track championship in ’05 with our ’55 Chevy station wagon. It’s an all-steel car other than the nose. I started in ’07 when I got in the car. I liked everything about it; I had a knack for it and understood how it all worked,” Glenn said. “I started racing the ’68 El Camino that I still have and race from time to time. I’ve had a lot of success with that.”

More than a decade later and 2,700 miles removed from Washington state, success has followed Glenn on a different platform. Glenn, 30, a longtime crew member for Mooresville, North Carolina-based KB Racing and three-time Pro Stock world champion Jason Line, on Nov. 14 was named the recipient of the NHRA Rookie of the Year.

The award recognizes the top first-year competitor in the NHRA Camping World Drag Racing Series via voting by auto racing journalists based on criteria on and off the track.

When Line stepped out of the Chevrolet Camaro SS at the end of the 2020 season to focus on shop-based race preparation, Glenn was presented the opportunity to get behind the wheel if only on a part-time basis. Primary sponsorship from RAD Torque Systems allowed the program to expand to the full season and into 2022. He’s been a quick study in the car while continuing to turn wrenches on the Camaro.

“He’s a rare bird nowadays,” said Line, who was the 2004 NHRA Rookie of the Year award winner. “He has a passion for the sport that is not often seen anymore. A lot of people want to be race car drivers; that’s the easy part. Dallas can do a lot of things — he’s very talented — and he wants to learn all aspects of it. He’s a hard worker. He’s making the most of his opportunities. It’s fun to watch.”

Glenn earned his initial Pro Stock victory in his fourth start, added two wins and a pair of runner-up finishes. He maintained the quickest reaction time, which included being only the sixth Pro Stock racer to record a .000 time in a final, of all competitors throughout the 17-race season. The rising star finished third in the Pro Stock championship standings.

“I knew pretty early on that Pro Stock was where I wanted to go,” Glenn said. “I had told people for years, even before I got to drive, that I wanted to work on a Pro Stock team and everybody was like ‘OK, that’s great, but what are you really going to do?’ I understand there are not many people who get to do this and the chances of me making it are pretty slim. But if you keep your head down and focus on one thing you can make anything happen.

“KB Racing has a lot of brain power and experience that I’ve been trying to siphon as much as I can; I think I’ve learned a lot over the last few years. I bet we have over 10,000 runs at KB Racing. Pretty much if it’s happened in a race car it’s happened to Jason at least once. If I have a question about anything, he says do this and that. Working on Jason’s car for eight years and watching him drive, I’m sure some of my driving style is like his.

“I have been having a lot of fun in the car. I feel I can get in, not nervous, I know what to expect, I can run through the motions and focus on the finer details. When you get a lot of runs in a car you no longer think about the things you have to do, you can focus on the little stuff and the things you have to do just come naturally. There is a rhythm and routine.”

After some down time for the holidays, preparation for the 2022 season that begins Feb. 18-20 at Auto Club Raceway in Pomona, California, will be at the forefront of Glenn’s activities at the shop in North Carolina. With the taste of success, new, loftier goals have emerged.

“I’ve been successful and I’m thankful for that,” he said. “I’m really hungry and I won’t stop until I see the No. 1 on the side of the car.”