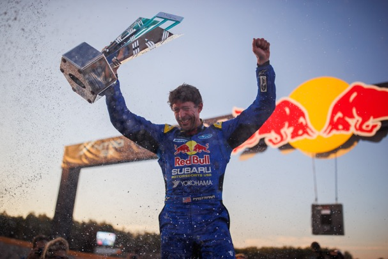 To kick things off, Pastrana had a special surprise for The FIRM crowd. When he invited NASCAR star Chase Elliott (USA) to join Nitro Rallycross for the Florida finale as a guest driver, Elliott quickly said yes – but had one condition: that Pastrana skydive. On Sunday morning Pastrana made good on his word, jumping from a plane piloted by Elliott.

Pastrana then went to work, winning a crucial first heat against Kevin Hansen (SWE). Not only did the victory put him directly into the Florida final, it also completed a sweep of his Nitro RX 2021 heats. Speed followed suit, locking in a final spot with a win in his first heat. Elliott then punched his ticket in the semifinal rounds as did Kevin Hansen.

Timmy Hansen set the pace early in the Florida final with Pastrana close behind him. The lead changed hands on the third lap, with Pastrana holding off his challengers until the final lap when he was overtaken coming out of the joker. Timmy Hansen crossed the finish line first followed by his brother Kevin, with Speed taking third.

While today’s race did not go Pastrana’s way, his prior victories in Phoenix and Southern California were enough to win the first Nitro Rallycross Supercar Championship. Afterwards he said, “Thank you to Subaru and thank you to the fans, thank you guys for coming out.”

Pastrana added, “It’s been an amazing year, it exceeded all my expectations as a driver. I want to win as a driver but even more I want Nitro Rallycross to be the best championship out there. Now we have a proven concept. We had the best rallycross drivers in the world, we had NASCAR Cup championship winners like Kyle Busch and Chase Elliott come out. It was a great first year, and I’m even more excited about the future.”

Timmy Hansen congratulated Pastrana on his historic win. “Massive congrats to Travis, not just today for wrapping up the series title but for this whole year. He has been the one to beat at most races and he put this whole championship together, so I couldn’t be happier for anyone.”

After an exciting series of NRX Next racing, it also came down to the finale. All eyes were on Casper Jansson (SWE), who came into North Florida in first place and looked to lock up the series title. Sage Karam (USA) took the checkered flag in today’s race, but it was not enough to catch Jansson in the series standings: Karam finished in second and Martin Enlund (SWE) came in third.

Nitro RX showed that the future of Rallycross is bright. Jansson was thrilled with his victory and said, “This is my first season of Rallycross and I’m really happy. I have leveled up very much and I learned a lot.”

Nitro Rallycross looks to come back even stronger in 2022. For information on how and when to experience Nitro RX’s high-flying action, check https://www.nitrorallycross.com/.

Nitro Rallycross is part of Thrill One Sports & Entertainment. Thrill One is a next-generation content company that lives at the nexus of sports, entertainment and lifestyle, combining the resources of Nitro Circus, Street League Skateboarding, Nitro Rallycross and Thrill One Media. A multi-media platform founded in 2020, Thrill One is dedicated to creating mind-blowing action sports events and original content, fueled by the most daring athletes, talent and brands in thrill-based entertainment. It also boasts one of the largest aggregate social audiences in action sports, with more than 40 million followers across its multiple brand pages and channels. Visit thrillone.com/ for additional information.