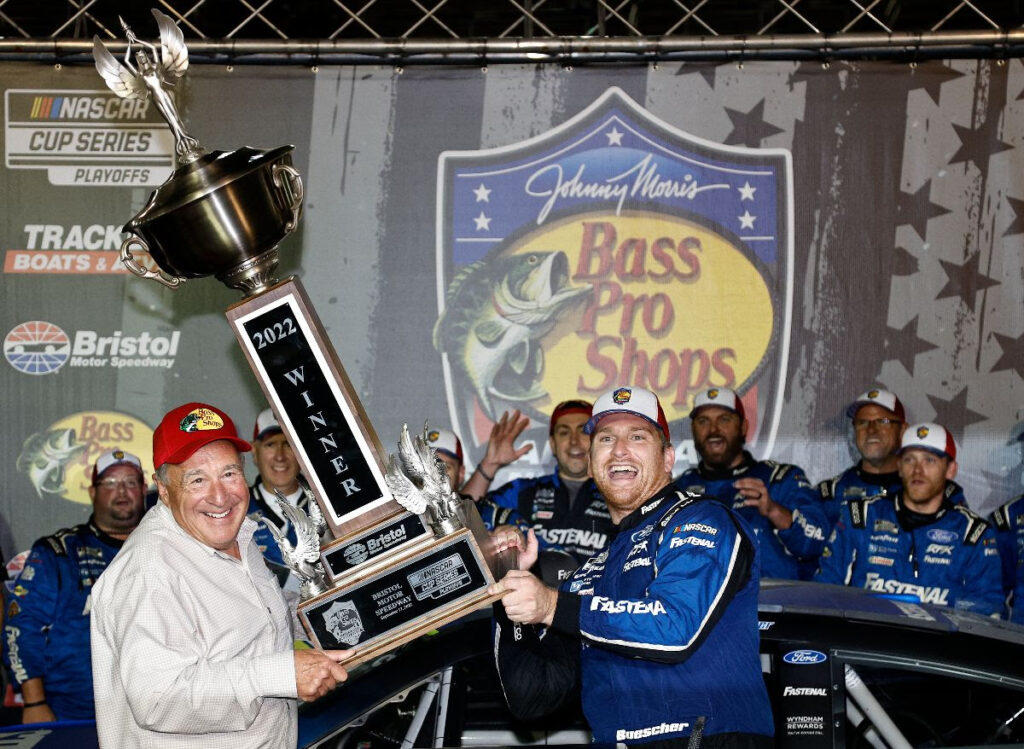 After the event that set the field for the Round of 12 in the series Playoffs—and eliminated superstars Kyle Busch and Kevin Harvick from the postseason—a dozen drivers were breathing sighs of relief and hoping fervently for a return to stock car sanity in the next round.

A two-tire pit stop under caution on Lap 438 of 500 put Reddick in the lead for a restart on Lap 444. The driver of the No. 17 Roush Fenway Keselowski Racing Ford led the final 61 laps and a race-high 169 overall to give the RFK organization its first victory since Ricky Stenhouse Jr. took the checkered flag at Daytona on July 1, 2017 at Daytona.

The victory was the first for RFK Racing since Brad Keselowski joined the organization as an owner/driver after the 2021 season.

Buescher was the third straight non-Playoff driver to win a race in the Round of 16, an unprecedented occurrence.

“It’s so special here,” said Buescher, whose only other Cup win came in a rain-shortened race at Pocono in 2016. “I love this racetrack. I love the fans. I love every time we come here. It’s so special. It’s pretty awesome.”

Buescher said he wasn’t worried about starting the final run on two fresh tires, even though everyone chasing had four.

“I don’t know what all to say right now. I’m out of breath. This place will wear you flat-out, and I love that about it. It’s just a special night.”

Elliott was .458 seconds behind Buescher at the finish. William Byron came home third, followed by Christopher Bell, who posted his third straight top-five finish in the Round of 16. Kyle Larson was fifth and Ross Chastain sixth, as all five drivers immediately behind Buescher in the finishing order advanced to the Round of 12.

Denny Hamlin, Chase Briscoe, Daniel Suarez, Joey Logano, Ryan Blaney and Alex Bowman also clinched spots in the next round, though all had serious issues during the race.

Elliott got closer to Buescher on the final two laps but ran out of time.

“I felt like we were gaining, but it was… I wasn’t close enough to do anything with him,” Elliott said. “But I appreciate the effort. We had a long day yesterday. Was able to battle back from a bad qualifying effort (23rd) to get a top two, so proud of that.

“Glad to be moving on (in the Playoff) and looking forward to some more opportunities here these coming weeks.”

Needing a victory to advance to the next round, Harvick ran consistently in the top five after staying out at the end of Stage 1 to gain track position. But Harvick’s chances evaporated in the pits on Lap 438 when his crew failed to secure the left-rear on his No. 4 Stewart-Haas Racing Ford.

As the tire rolled away, Harvick had to back up into his pit stall. The lost time left him 10th for the final restart on Lap 444. That’s where he finished, exiting the Playoffs in 16th place.

“It was pretty tough,” Harvick said. “We pitted in front of the 17 (Buescher), so just kind of the way the year has gone. Just went from having a chance to lead the parade to being a part of the parade. Just difficult to pass.”

Busch’s ouster was a touch-and-go affair. Both he and Tyler Reddick fell two points short after Austin Cindric, who finished seven laps down in 20th place but gained enough positions by passing back markers to advance.

Busch had accumulated 14 points in the first two stages and was running above the cut line when his engine blew on Lap 270—Busch’s second such failure in the three Playoff races.

“It just goes with our year,” Busch said. “I don’t even know what to say. I’m flabbergasted. I just feel so bad for my guys. They don’t deserve to be in this spot. They work too hard. We are too good of a group to be this low—down on the bottom, fighting for our lives just to make it through. Two engine failures in three weeks, that will do it to you.”

Reddick and Richard Childress Racing teammate Austin Dillon both failed to make the Round of 12 after both drivers’ Chevrolets were damaged in a 12-car pileup on the backstretch on Lap 277. Reddick finished 25th and Dillon 31st.

Keselowski led 109 laps and appeared to have race-winning chances until his right-front tire went flat on Lap 414 while he was leading.

“We had two cars that were really good today and one that was unlucky and one that executed, and everything came the right way for them,” Keselowski said.