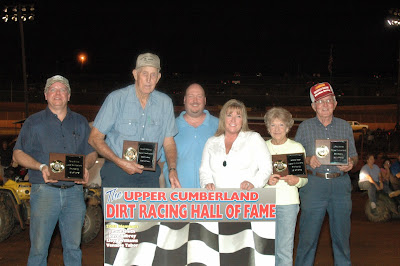 In the spring of 2008 a group of Dirt Racing fans and support personnel began plans for the establishment of a Hall of Fame for Crossville Raceway and the surrounding area.
Led by longtime racing announcer Thomas Montgomery they contacted several of the old time racers and fans for suggestions and nominations. The process continued into the summer months as a group of nominations was reviewed and a final selection of the first four inductees was made. Tom then had the task of tracking down those individuals, scheduling a date and time for the induction as well as securing a sign and engraved plaques for each person.
With the process completed and all details finalized the ceremony took place at Crossville Raceway, on Friday evening August 29. This was the final night of the regular season at Crossville Raceway, so the induction was a fitting cap of the season. The four Inductees are:
J Paul Smith, a Crossville native has been an Auto Racing fan his entire life. In 1984, Mr. Smith purchased a tract of land on Hwy 70N from Mr. Hugh Neal and began construction of a race track. During the process, he traveled to Braselton, Ga. to study the layout of Lanier National Speedway. With the information in hand, Mr. Smith returned to Crossville and implemented many of the design characteristics he observed in the construction of Crossville Raceway. On May 18, 1986 the new Crossville Raceway hosted it’s first ever race with a capacity crowd. That season continued with Standing room only crowds throughout the summer. Under Smith’s leadership the track was a Nascar sanctioned track hosting some of the biggest dirt racing events in the south. Famous names were seen at the track including Dale Earnhardt Sr., Ken Schrader and Michael Waltrip.
Lloyd ‘Red’ Williams began his racing career in the mid 1950’s with two partners. They drove the cars while Red maintained the cars. In 1968 Lloyd began driving the #97 racecar and about that time his son Sam turned 16 and wanted to join dad on the track. Among his accomplishments Williams won the very first race at the Legendary Atomic Speedway, in nearby Lenoir City. In addition to the racer side of the sport, Lloyd served as a flagman at various tracks including Crossville, Spring City, Atomic, Buffalo Valley and the Roan County Raceway. Red can still be found at the local races where his sons Sam and Rick are still driving as well as his grandson Brandon who already is a force to be reckoned with at Crossville Raceway.
Venable Tabor began his racing career in 1962 when he returned home to Crossville from a tour with the Army. He had a friend with an old Studebaker and they decided to go racing with ’Tabe’ as the driver. The plan was a simple one, they knocked out the glass on the Studebaker, installed a roll cage and headed for the track. Later he drove a Ford where he won one of the first races at the old Crossville track on Potato Farm Rd. In the 80’s Tabe was a favorite in his Red and White #25 Monte Carlo, winning 6 track championships, including five straight at Crossville Raceway. Tabe ended his racing career in the mid 1990’s and was called for the Lord’s team on May 29, 1999. Representing Venable Tabor at the induction were his wife Ruby and daughter Jennifer Purkey.
Dave Bilbrey, another Crossville native started racing at Atomic Speedway in 1982. Dave earned in excess of 150 feature wins as well as multiple track championships at Crossville Raceway, Atomic Speedway, Wartburg Speedway and the Tennessee Motor Speedway. Among Dave’s big wins were, The Plateau 100, the Firecracker 100 and the Pepsi 100. In addition Dave once earned $6,000.00 winning a pair $2500 races that added a $1000 bonus for taking both wins. Most fans remember Dave Bilbrey in his White and Blue #44 Ultra Lite A&B Body Shop car. Dave was unable to attend the ceremony. Jeff Kilburn accepted the plaque for Dave.
The Upper Cumberland Dirt Racing Hall of Fame will become a permanent fixture at Crossville Raceway with induction of new members taking place each year.