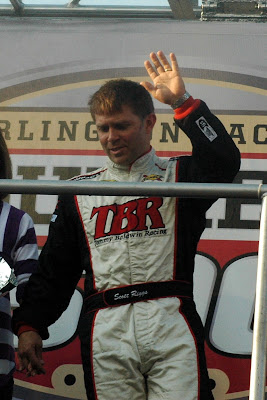 In what appeared to be last minute, low budget idea, Tommy Baldwin Jr. threw together a NASCAR Sprint Cup team, just in time to enter the 2009 Daytona 500. With some volunteer help and borrowed equipment, he showed up in Daytona and announced that Scott Riggs would be his driver for 2009.
Riggs was one of two drivers that found themselves out of work after Haas CNC enticed Tony Stewart to join the organization by offering him an ownership stake in the company. With fewer cars and an abundance of drivers, Riggs had few choices if he wanted to remain in NASCAR’s top series.
Riggs qualified 30th for the 500 and fought his way to an 8th place finish in the first Gatorade Duel, to make the field for the 500. Starting 17th, Scott fought hard to be competitive and finished on the lead lap with a respectable 25th place. For a brand new “Go or Go home’ team, the outing was impressive.
Heading to the West Coast in week two, the 36 car qualified 36th and finished 36th, 10 laps off the pace. Baldwin and the team had high hopes as the headed for Las Vegas, but they would fail to qualify, going home early. That story would repeat itself the next two weekends at Atlanta and Bristol. At Martinsville, qualifying was rained out and based on 2009 attempts the team started 40th and came away in 30th place. But the fact that the team was still not in the top 35 in owners points, a bad qualifying effort sent them home early from Texas.
Since Texas the team has made every race since Texas, but coming into Charlotte for the 600, sitting 41 in owners points, both sides agreed that it was time for a change., and it was announced that Riggs would be replaced.
Heading to Dover this week, Mike Skinner will be the new driver for the 36 Cup team, however the former Camping World Truck Series Champion has said that his first priority has his full time ride, the #5 Truck team owned by Randy Moss. When the two series schedules conflict, Patrick Carpentier will fill in for Skinner, and Brian Simo will handle the driving duties for the Road Courses at Infineon and Watkins Glen.