Nationwide drivers line up to raise money for the Red Cross 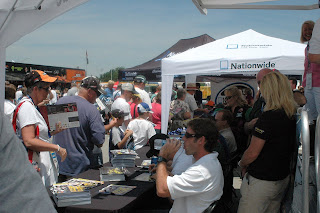 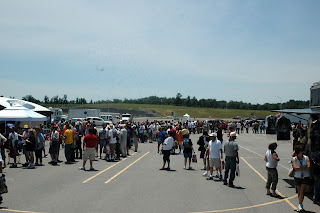 This past Saturday (June 6) 18 NASCAR Nationwide Drivers lined up to help raise funds to help the Tennessee victims of a tornado that struck during the series last visit to the area.
During the April race weekend at Nashville Superspeedway, a tornado struck just a few miles south of the track in the Murfreesboro area. The local Red Cross jumped into action to help folks stranded by the damage. While at the track that weekend, I was there when a track security worker got the call that her house was GONE. That struck close to teams and media members that were on hand.
Nationwide Insurance along with NASCAR and the Nashville Superspeedway teamed up to support the local American Red Cross Nashville Chapter. They conducted a pre race driver autograph session with 18 NNS drivers just outside the front gates to the grandstand.
This was a chance for fans to get up close and personal with a large number of drivers all at one time and one place. The scene was reminiscent of days long ago when Nascar drivers would willingly mingle with the fans. Those were the days that made Nascar the success it enjoys today.
Those days are long gone as drivers run and duck to avoid fans. The personal side of the sport that Richard Petty and Dale Earnhardt Sr advanced on a regular basis seems to be nothing but a faded memory of old time racing folks like myself. The scene Saturday at Nashville brought back old memories of the King sitting at a table and staying there until the last fan got his autograph. The days when drivers could be seen on race weekend in parking lots with show cars, signing autographs and posing for pictures with fans.
Last year and more so this year, Nascar is struggling with a dwindling fan base. Long sold out venues are scrapping the bottom to sell tickets. The once impossible happens as we speak. This morning I got an email from Bristol Motor Speedway, alerting me that they had tickets available for the ‘Night Race’, something I have not seen in more than 10 years.
Perhaps a lesson could be learned from this small effort put together last weekend. Could such sessions on a weekly basis be a driving force to increase fans? Imagine the fans at a Cup race having this opportunity. No, the fans were not ‘required’ to buy souvenirs, nor were they ’required’ to sign up in advance for the limited number of autographs. This was ‘old time racing’ back in front of the fans, and it was welcome with open arms.
In all the worry about the future of the sport, maybe it’s time for Nascar, the Tracks, the Sponsors and the Drivers to humble themselves just a wee bit and make this a weekly event at the races.
There were 18 drivers in line at Nashville, that’s about half of the regulars in the series. If just 10 drivers in a series would give up an hour of their time each weekend to do this, think about the extra fan draw for the races. Yes, if you build it they will come, but if you put the stars out there with the fans, even more will come. At that rate, it would mean each driver would have to appear roughly once every 5 races, or 7 times a season.
Even without a souvenir requirement, chances are those sales would jump too, especially for the drivers available each week.
How about it Brian France, Mike Helton, Bruton Smith, Jeff Gordon, Tony Stewart and all the rest of the drivers? Would anybody be willing to go back to the old school for the sake of the fans and the sport? Today, unlike the old days, Owners, Crew Chiefs and even Crew Members like ‘Billy Bad Butt’ would be greeted with excitement and anticipation by the fans.
So what do you say Nascar? How about the fans, does anybody else out there think this needs to be part of Nascar’s future? Let Nascar know, let me know and I will pass it along.