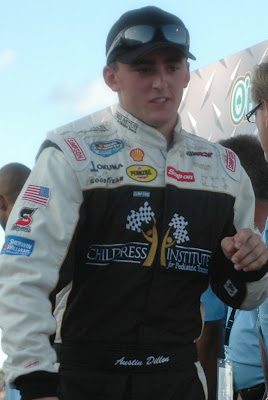 So many up and coming young drivers in NASCAR are pushed to the limit to succeed at higher and higher levels at an accelerated pace today. The push sometimes means lost opportunities when the expectation fall short and promising drivers are released by teams. So it is refreshing to see the career of 19 year old Austin Dillon as he acquires his racing experience over several years and various series in an anticipation of establishing a Nascar career.

At aged 15 Dillon started 2005 running the Bandoleros and then moved up to the Legend cars, finishing the Legends season with 4 wins and 25 top 5 finishes. He continued with the Legends through 2006 and also attended the Dale McDowell Dirt Late Model Racing school. That led to a win in 2007 at the All Star Challenge at the Dirt Track at Lowes Motor Speedway. Austin went on to compete in 34 Dirt Late Model races, where he won 3 races and finished in the top 10 twenty five times.

In 2008 Dillon moved up to the NASCAR Camping World East Series where he had 1 win, 10 top tens out of 13 races and finished second in the series. This was also the year where he got his first chance to run in the NASCAR Nationwide Series. In September he entered the Emerson Radio 250 race at Richmond International Raceway in the RCR 21 car, starting 31st and finishing 26th. Five races later at Memphis Motorsports Park, again in the 21 car he started 18th and finished 4th.

For 2009, Dillon has continued with the Dirt Late Model Racing and had run only one NASCAR Nationwide race, in April at Phoenix International Raceway. In the RCR 2 car, he started 35th, finishing 34th. This past weekend Austin returned to the series piloting the #2 RCR car once again for the Kroger 200 at O’Reilly Raceway Park at Indianapolis, In. Working with crew chief Dan Deeringhoff who got the car dialed in during the delayed practices Dillon qualified 26th. “I’m real excited about tonight, ORP is a really different track.“ said Austin after qualifying, “ We worked really hard today in practice. We couldn’t get where we wanted to, but we’ll come around here.“ With the adjustments Deeringhoff was able to make during the race, the #2 car had a respectable 18th place finish.

The team will head to Iowa Speedway for the U S Cellular 250 this weekend with a sponsor on the car. The RCR 2 car will carry the High Point University name on the car. That sponsorship means a lot to Austin, as he will attend the University this fall. When I asked how he will manage school and a driving career, Austin was really excited. “The University is real good about that. They will let me attend classes and still be able to race. That is one of the reasons for choosing that school, plus it’s a really good school, so it was an easy decision.”

He appears comfortable with the speed at which is training is moving. “We’re taking our time, trying to get as much experience as we can, we’re doing the right things right now to help further my career.” explained Dillon. “Right now, it’s all about sponsors, and when you get a sponsor you can run more.” He’s optimistic that the 2 team can land enough sponsorship to run at least 20 race in 2010. Comparing the transition from the Dirt Late Models cars, to the Nationwide cars, “It’s a totally different feel, I have been running the Dirt car for the last 8 days and coming over here in an asphalt car it’s a lot different. You brake really hard, your stopping in the center and you have to be real consistent. You have to be consistent in the dirt car, but here your not sideways. In the dirt car your running 850 horsepower and here your running less horsepower but you have to drive harder.”

This is a really strong individual effort by Austin, it is obvious that he goes out of his way to work with the crew chief and the team members. Other than a brief chat on the Pit Road wall, interaction with his team owner / Grandfather, Richard Childress was very low keyed. As a third generation driver, Dillon is getting a start at the game early and shows real determination and the drive to succeed in NASCAR, but more importantly he is showing a great deal of patience.