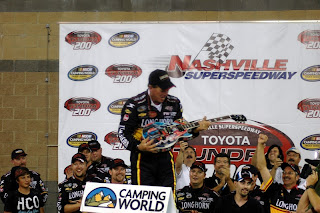 He did what many thought was impossible, Saturday night Ron Hornaday captured the checkered flag in the Toyota Tundra 200 at Nashville Superspeedway he set a new record in the series. This was the first time that any driver has won in NASCAR’s top three series since 1971 when Richard Petty and Bobby Allison both did it that year.

With rain in the forecast qualifying at Nashville Superspeedway went off without much difficulty. That of course was after Jason Young the first driver out brushed the wall, resulting in no time recorded. Todd Bodine was the early pole sitter, but after a progression of changes, Timothy Peters in the # 17 Strutmasters/Red Horse Racing Toyota turned in the fastest lap of 30.122, 159.312 mph and earned his first ever pole in the series.

Peters held the lead for the first 34 laps when Ron Hornaday got by him to lead the way to the lap 35 competition caution. Hornaday held the lead until the 4th caution, for debris on lap 85. A round of yellow flag pits stops allowed Jason White to take the lead on lap 86, but it was short lived as Hornaday powered past him to take the lead back on lap 92. Once he was displaced by the #33 of Hornaday White quickly fell back in the field.

Rain brought the caution again on lap 102, but only three laps later, the field went back to green as the heat on the track kept the racing surface clear. With rain threatening all night it looked like a smooth finish coming when with 2 laps to go, on lap 148, Terry Cook had a tire let go and spun bringing out the caution. Todd Bodine, who had been in the top 10 also pitted for two rear tires, causing him to restart 19. That set up a green, white, checker finish, extending the race to 154 laps. Hornaday got a good start and established a comfortable lead to take home the win.