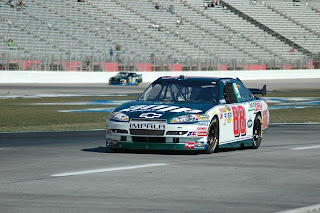 After three weeks of less than ideal weather for racing, the teams and the fans are happy to be at Atlanta where the skies are clear and the temperatures are in the mid 50’s on Friday afternoon.
The Atlanta Motor Speedway staff is so happy with the weather, track president Ed Clark has called in reinforcements. He’s adding a slew of tickets sellers in anticipation of a strong walk up crowd for the Kobalt Tools 500 NASCAR Sprint Cup Race.
Drivers are also talking about the weather and the return to NASCAR’s fastest track. “This is an awesome race track” and exclaimed Clint Bowyer, “ As a race car driver, you look for a race track with multiple grooves. It’s got a lot of fun to race on these older race tracks, slippin’ and slidin’, run high, run low, run in the middle … what ever it takes to find grip, you can do that here.”
Mark Martin was quick to remind fans that “Hendrickcars.com is giving away my uniform from this race and folks can register on line for free.” Back to the racing, Martin gave credit to Goodyear for bringing a tire to Atlanta that is a big improvement over the one they had last year. “The cooler weather is going to be favorable for the cars handling. This multi-groove track just makes for a lot of fun. I can’t wait to get started.” To back this all up, Mark Martin went out for the first practice and recorded the fastest lap.
Just when everyone is getting used to the 50 year old ‘Kid’ Mark Martin making a resurgence in the Cup Series, 60 year old Geoffrey Bodine is here at Atlanta to drive the #95 Dodge for Team Gill Racing in the NASCAT Camping World Truck Series. Lacking a sponsor the team is celebrating Bodine’s part in the United States 4 man Bobsled team’s Gold Medal in this years Olympics. The 95 truck is decked out for the Gold winners as well as the Bo-Dyne Bobsled Project which built the sleds for the winning team. The members of the Olympic team will be on hand at the track this weekend as well as the Woman’s Bronze winning team.
Following Sprint Cup qualifying tonight, the NASCAR Whelen Southern Modified Series makes their debut at Atlanta Motor Speedway on the short truck in the tri-oval.