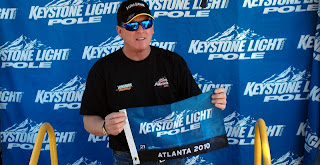 As 38 trucks attempted to qualify for the EZ-Go 200, NASCAR Camping World Truck Series race at Atlanta Motor Speedway, it was Matt Crafton in the 88 Australian Gold/Menards Chevrolet, setting the early quick time at 31.317 for 177.028 mph. That time didn’t stand up too long when reigning Series champion Ron Hornaday in the 33 Longhorn Chevrolet, circled the track at 177.721 mph for a time of 31.95. It looked to be a lock for Hornaday when the go or go home trucks took the field, but of course he still had to worry about the 18 Toyota Tundra Toyota of Kyle Busch.’ Going out 34th Busch soared up the board to second with a time of 31.268 for 177.305, but that was the best he could get, moving Crafton to third and making the mark for Hornaday stand.
Among the real surprises was the 30th truck to attempt as 60 year old, Geoff Bodine powered the Team Gill Racing,/ Bo-Dyn Bobsled Project to an 8th place starting position with a 175.682 mph lap. Missing the race was the 01 Koma Unwind Drink Chevrolet of Carl Long and the 87 D.W. Campbell Tire Chevrolet of Chris Jones. NCWTS, Raybestos Rookie of the year candidates, Austin Dillon, in the 3 RCR/ Bass Pro Shop Chevrolet starts fifth. Justin Lofton, in the 7 Visitpit.com Toyota rolls off 22nd, while Jennifer Jo Cobb in the 10 Driven/ JJC Racing Ford starts 31st and Brett Butler in the 47 Fuel Doctor Chevrolet starts 32nd.
The E-Z-GO 200 NASCAR Camping World Truck race takes the green flag at 2:00pm est.