It’s early afternoon on Friday, the NCWTS got in both practices and the Cup cars got in their first practice, and the rain is falling with the wind picking up.
As we wait out the rain I have been giving some thought to the off weekend for the Cup teams.  We have seen that the economy is hurting all phases of NASCAR and that was all too apparent last week with empty seats at Bristol Motor Speedway.  I am still confident they will sell out the night race.  So, what to do on the off weekend?  Head on down to Nashville Superspeedway for the NASCAR Camping World Truck Series and the NASCAR Nationwide Series races. 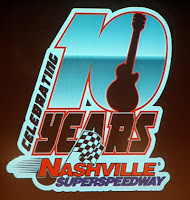 Starting Thursday April 1st, Nashville will host their first ever NASCAR double header weekend, and this could be a pretty good time to get one of the best NASCAR ‘Bang for your Buck’ opportunities. Yes, I did say Thursday, Series Sponsor Camping World is hosting a Fan Fest at their Nashville store Thursday night from 5-8pm.  Driver’s so far scheduled to appear are Jen Jo Cobb, Jason White, Ricky Carmichael and Justin Lofton from the NCWTS.  NNS drivers scheduled include Michael Annett, Trevor Bayne, Colin Braun, Scott Lagassee, Robert Richardson Jr., Scott Riggs, Reed Sorenson and Ricky Stenhouse Jr.
On Friday, at the track they will have a driver autograph session in front of the grandstand starting about 1PM. No need to register in advance for the autographs, it will be open to all fans. Last year they did this with the NNS race and had about 20 drivers there.  This time it will be both Truck and Nationwide drivers attending.  Last year the track started the ‘All Access’ pass that proved to be a hit with the fans, so it will return next weekend. For those on a budget, and who isn’t anymore, the folks at Nashville Superspeedway have really made the weekend affordable.
They have a weekend package for $99 that includes seats for both days plus the All Access for Saturday, Friday tickets as low as $35 for adults $10 for kids and Saturday as low as $45 and $15. .  If that doesn’t fit your schedule or budget think about this,  with  special promotions through Pepsi-Cola  and Pizza Hut you can get $10 off on up to four reserved tickets. 30 Sav-a-lot stores in Tennessee will have $35 NNS tickets at the Sav-a-lot stores.
Psst, that $10 discount also includes the youth  (age 12 and under) tickets, which for Friday means rows 1-19 for kids are Free!
For all those Twitter folks there will be a Tweetup with @OnPitRoad, @NationwideBecky and a couple of unnamed drivers.  Meet near the Nationwide Insurance stand at 12:15pm Saturday.
Cup qualifying is now officially rained out at Martinsville, but forecast calls for clear skies tomorrow.