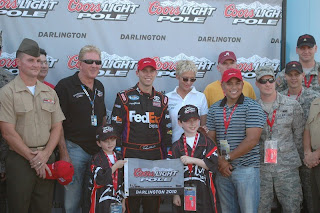 Denny Hamlin continues to show his stamina as he climbed into the #20 Z-Line Designs / Operation Helmet, Joe Gibbs Toyota and clocked a fast lap of 27.936 on the Darlington Raceway 1.3 mile track.  That lap recorded a speed of 176.031 mph besting second place starter, teammate Kyle Busch by less than 5/100ths of a second.  That puts the JGR matching Toyotas, both sponsored by Z-Line Designs on the front row.
Hamlin’s good fortune stands in start contrast to NASCAR veteran Morgan Shepherd, who turned  the slowest lap of the go or go home cars at a speed of only 164.662 mph.  The missed race is the fourth one of the year for Shepherd and his  #89 Racing with Jesus Chevrolet as  he joins so many other teams hurting financially due to the poor economy and lack of sponsorship dollars.  Also missing tonight’s race will be Johnny Chapman in the unsponsored K-Automotives Dodge, along with Willie Allen, in the 31W Insulation Chevrolet.
Eight of the top ten qualifiers are Double Duty Sprint Cup drivers, including Brad Keselowski, Jamie McMurray, Carl Edwards, Kevin Harvick Greg Biffle and Clint Bowyer.  The lone NASCAR Nationwide  Series regulars in the top ten are Justin Allgaier in the #12 Verizon Dodge, starting 6th and Trevor Bayne in the #99 Diamond Waltrip Toyota.
Clint Bowyer is still behind the wheel of the #21 Zaxby’s Chevrolet, while John Wes Townley remains missing in action. Repeated inquiries to Richard Children Racing are still answered with the ‘no comment, other than Townley is still a Developmental driver employed by RCR.  Colin Braun is once again missing from the Roush Fenway Racing #6 entry as Matt Kenseth pilots the unsponsored car at Darlington.