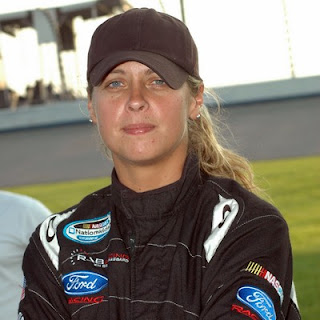 By Joe Dunn
She fell in love with racing when she turned her first lap in a 5hp go kart at the age of 13. At 14 she was racing a 250cc micro sprint that she had built herself with a little help from her dad. Over the next seven years Ashley Parlett continued racing, moving up to full sized 360 sprint cars, all the while building her own cars.
By 2005 she was convinced that racing was her future and had to determine the best way to turn her passion into a profession. It was following a conversation with World of Outlaws Sprint Car driver Jeff Shephard that she decided that she needed to move to Charlotte, NC if she wanted a serious chance at being a champion race car driver.
Shortly after arriving in Charlotte she found work as a suspension and brake specialist in the NASCAR Craftsman Truck Series, where she worked for several teams.  Eventually she landed with Xpress Motorsports on the No. 16 team with driver Mike Bliss. When asked about the transition from building and working on her own sprint cars and then moving to NASCAR work, she laughed and told me, “The biggest change I had to get used to was that I hit my head on fenders about 50 times.  With the sprint cars, we didn’t have any body parts that got in the way.“ But she still had that desire to be a driver, so after a chance to race an Andy Hillenburg ARCA car at Toledo, she went to work for Hillenburg’s Fast Track Driving School as an instructor.
Parlett’s stay at Fast Track ended when she landed a job with a newly formed ARCA team, RAB Racing with Brack Maggard, where she went to work as a brake and suspension specialist.  The hope for a driving career in the big leagues seems to have been put aside, at least for the time being. “ I kind of gave up on the driving idea,” Ashley told me, “I love racing cars, but when it comes to being a race car driver so much is out of your hands. Nowadays, with the economy the way it is, and the race teams the way they are, you almost have to have a pocket full of cash, before somebody will give you a chance.”
Changing the subject to her current position as a crew member on a full time NASCAR team, Parlett is very upbeat and positive. “As a mechanic, it’s something that I can kind of control. It all depends on how hard I am willing to work, how much of my life I am willing to invest in it, is how far I can go with this.”  Referring back to the driver option she is pretty blunt about the situation. “ I’m not waiting around for a phone call, or for a pocket full of cash to just ‘show up’ in order to do it.  I’ve just got to work my tail off and keep digging.” 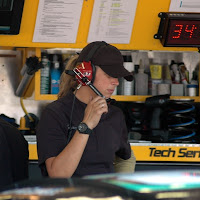 During her four years with the small team, she has progressed through the various crew jobs and is now the Car Chief. She has enjoyed her time with RAB Racing and appreciates the growth a small team has allowed her. When asked if she thought that RAB racing might move up to the NASCAR Sprint Cup Series someday, and how that might effect her advancement with the team, she was straight forward.  “ Right now we’re still doing the Nationwide Series and it’s a growing team.  We’re struggling a little bit with the economy the way it is, but I feel like this is a very stable team to be with.”
The obvious next step up for Ashley would be a Crew Chief job, and she sees a possibility of that happening someday if she stays with RAB racing. “ I think that is absolutely possible, I think the only down side of that is that I have been with this team for four years.  It’s appealing to me to work with other teams because when you work with one team so long you don’t get a chance to expand mentally. You don’t get to see different views and ideas, you adapt to the way that crew chief is working and you learn only that way.  I am anxious to learn as much as I can.  I’m happy to stay here, I’m happy to grow with RAB Racing whether they continue to grow or stay where they are at now.” 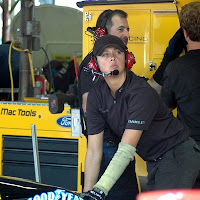 Parlett feels especially loyal to this team and values the experience she has garnered here. The ability to learn from various crew chiefs is something that she feels is need to grow in this field. “ This year, we are on our fourth crew chief, so I have had the opportunity to work with quite a few different one’s this year.” she continued, “ That’s been great, it’s been a big learning curve for me.  Everybody has a different way of doing things, they all wind up in the same direction but they have a different way of going about it.”  Looking back at the differences, Parlett feels that she has grown and learned more from it. “ It’s helped me be better at my job because I am learning several different ways  to get to the same place.” thinking about that for a second, she added, “ It’s been a big help working with all these different crew chiefs.”
Parlett’s family support is important to her and she perked up when asked about her families response to her move and changes. “ They loved that I tried to pursue the driving aspect of it.” she said, “When it didn’t pan out, I didn’t pack up my stuff and move home. My dad was really proud of me for that and happy that I’m looking in other directions to keep moving forward with my career. They are pretty happy with this, and they watch every week to see how RAB Racing is doing.”
Summing up the sport and her part of it, Ashley put it this way. “You can’t just be somebody who doesn’t love this sport and walk in and expect to go to work from 7 to 4 and go home and live a normal life. Racing is a Lifestyle.”