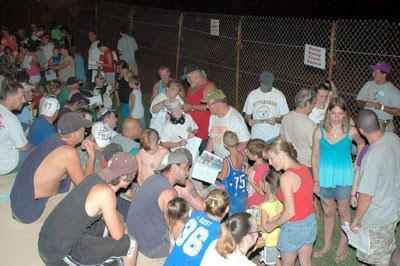 It’s been called the fastest little bullring in east Tennessee, but for many of the local racers and fans, it’s just called Home. Spring City Raceway, located on US Hwy 27 just north of Dayton, TN  sits on what was once an old quarry, converted some years ago to a small dirt track.
Saturday night, June 26 was a normal race night at the track, but a recent tragedy and some hard work and dedication by the staff made this night anything but normal. Track bookkeeper and go to girl Lori Brun had begun several weeks ago organizing a ‘Meet & Greet’ for the fans and drivers to share some time together during the race program on this night.  But as word got out interest in this idea seemed to grow and the anticipation of all involved increased with time. A photo book for driver autographs was in the works with plans to have several copies available for the fans.
One week before the scheduled ’Meet &Greet’,  tragedy struck the Spring City Raceway community, an automobile accident on June 18, in nearby Rockwood, TN  took the life of long time racer Tony Yother. Affectionately known at the track as Studmonkey, the Blue Chevy T2 car was a familiar sight. The June 19th race night was filled with sadness as many mourned the loss of one of the Track’s own.
With the loss of Yother, the autograph book which was nearly ready for print was altered to include a special tribute to Studmonkey. This was the track’s way of honoring one of their own.  As the weekend approached, more and more interest was expressed in the books and with limited funds, the track had what they thought was a safe number of books printed.
As the cars, drivers and fans began arriving at the track Saturday night, the concession stand was overwhelmed with demand for the books which quickly sold out.  Lori Brun stepped in to assure fans and drivers alike that she would take orders and have more books available at the next race.  In the meantime, she prepared autograph cards for fans who were unable to obtain books, so they too could get autographs of their favorite drivers.  Following the heat racers, the drivers took their places along the front row of the grandstand and a larger than normal crowd gathered to meet them.

There were a lot of familiar faces there, but there were also some that had not been seen at this track for a long time.  In addition to the ‘regular’ drivers, fans got to meet with folks like Tim Totherow, from Signal mountain, TN.  Tim who grew up in the area suffered injuries several years ago that left him at the mercy of his wheelchair.  Determined to not give up racing, he fought back and returned to the race tracks a few years ago.  He now races at Boyd’s Speedway on a regular basis, but was quick to make a return to Spring city when a call went out to past drivers to take part. Another regular from a few years back, Johnny Stout brought out his #6 mini stock, John Stout Sr., another old time local racer joined his son. Bryan Frost, who now competes at nearby Wartburg made his way to the track also. Up in the grandstand other past drivers arrived and of course a familiar face, former driver and previous Spring City promoter Tip Watson was also on hand. 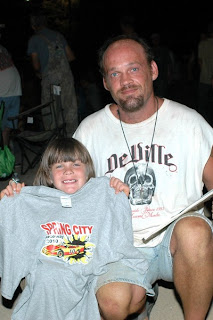 As the drivers started leaving the grandstand area to get the feature races underway, there was still a lot of excitement among the fans. As many compared their books with each other, showing off autographs of their favorite drivers, one young lady stood out. Seven year old Raylee K Hawkins of Lake City was at the races with her daddy, Jimmy Hawkins. Little Raylee proudly showed off, not only her autograph book, but her shirt as well.  Between the two, she had gathered more than 70 signatures, including her favorite driver, Sammy Johnson.
In recognition of the feat, she was awarded a Spring City Raceway T Shirt, which she proudly displayed for all to see. The fans were not the only ones who enjoyed the night, Limited Late Model driver, John Burger summed it up this way, “ That was an awesome idea, I had fun signing all those books and T shirts. Thanks again for the great memories at Spring City Raceway.”