It was a 51 year reunion of sorts and I’m not sure who enjoyed it the most.  I felt like I had fallen back in history, to a time that I have had the pleasure to study over the years. The time was 1959, racing news was not available like today, so most  of the information was weeks or months late, gathered from the ‘racing papers’ sold at the local race tracks. Record keeping was sporadic at best and  there was no central records office for auto racing.

Daytona International Speedway had opened in February of 1959 with it’s inaugural race, the Daytona 500, but the new track already had other racing venues scheduled. The 4th of July was to be a much anticipated USAC Champion (Indy car) race.  Promoters envisioned this to become the southern version of the Indy 500. But a 100 lap USAC race on April 4th, resulted in the death of rookie driver George Amick.  It was a mutual decision by UASC and DIS officials that the track was too fast and the surface too rough to ever run the open wheel cars there again.

This led Bill France Sr. and the folks of NASCAR scrambling to fill the date, and quickly a NASCAR Grand National event was added to the schedule.  Not to take away from the ‘glory’ of the ‘500’, this would be a shorter race consisting of 100 laps for a distance of 250 miles. Being held on Independence Day, the ‘Firecracker 250’ seemed to be a fitting name for the event.  With less than 3 months to get a field of cars in place, legendary promoter and NASCAR Vice-President Ed Otto reached out to his northern roots to get cars and drivers to fill the field.

It was late June of that year that John Paschal of Hibernia, NJ headed for Daytona Beach Florida in his quest to join the ranks of NASCAR at the new Speedway.  John packed up his 1957 Ford for the trip and hooked  his Sleepy Hollow Garage, 1958 Ford race car up with a tow bar for the trip. He arrived in Daytona early in the week and was the first car to arrive at the Speedway on Tuesday, for the Saturday race.  “ I had raced for a while up north, but I knew I had a lot to learn about NASCAR and wanted to be there early in hopes of getting some help and advice from the other drivers.” John recalled.

Paschal’s mother was already living not far from Daytona, so younger brother Tom  was quick to join in to help. Being at the track early, they both met up soon with Bill France Sr. who was staying in a trailer at the track.  “I got to talk to Mr. France and he was a really great guy”, said Paschal, “I explained to him that Tom was my ‘crew’ and even though he was too young (15) to get a NASCAR license, he took us over to the office and got Tom a license.”  John Paschal’s No. 60 team was assigned a garage area and as other teams began arriving, Lee Petty was assigned the garage next to John, with Ralph Moody also being nearby.  Over the days leading to the race John  learned of a lot of ‘little’ things he could do to improve the car for racing at Daytona.

“I was out running laps, I had it to the floor and all of a sudden two or three cars would go by, all bumper to bumper.” said Paschal, “When they got along side me, I saw the RPM’s on the tach go up and my speed increased.  As soon as they got by, everything went back to where it was and they were long gone.  I  had just learned about the draft!” Discussing the cars then and comparing to the cars of today, John told me that they had all of the factory glass still in the car and he had his windows open to try to keep himself cool.  He noticed that a lot of cars were running with the windows closed. “I was running out there, and I rolled up the window to see what it would do, and all of a sudden I was going 10 MPH faster.  That was something you would never experience at a short track.” he told me.

Brother Tom recalled that they were having trouble getting up the speed for a qualifying run, “I had the intake manifold off and Lee Petty came by and looked at the camshaft.  He told me to go over to the Holman-Moody trailer and get an offset camshaft key. I went over and got that key and we picked up almost 10 MPH. These guys knew all the tricks.”

John was told about the bump in turn four, where if you were running high and hit it, you would fly up into the wall. “ I knew about that bump, and when I qualified, sure enough, I was high and it threw me into the wall and messed up my run.” John explained. He was disappointed in the fact that he qualified and started 9th in his first race there.

Come race day, The No. 60 Ford managed to stay up front, “I was running 6th  for much of the race. Mom was home, but she told me later that she listened to the race on the radio and how excited she was when they mentioned my name several times.”  John still has fond memories of that and had tried, with no success to find an audio copy of that radio broadcast.  But his top 10 run would be derailed when his engine suddenly began losing power.  His oil pressure was dropping, the car was smoking real bad,  and he feared it would not make it all the way to pit road before his engine exploded, but somehow he managed to get there.  His engine was nearly out of oil and a check under the car revealed the problem.  A broken oil filter had allowed the engine oil to run out. Both Tom and John scattered up and down pit road and the garage area in an attempt to locate an oil filter. But they were running out of luck as the field raced past and not a single filter could be found.

It was a sign of sheer racer desperation and determination as they both started peering over the infield parking lots. John spotted a new 1959 Ford in a lot and they both climbed the fence to get at the car.  John crawled under the car and discovered the same engine with the same filter. Not bringing any tools in the rush, John struggled to remove the oil filter by hand. He managed to get it off and instructed Tom to leave a note on the car telling the owner what they did.

Over the fence and back to the car, they got the ‘borrowed’ oil filter installed, filled the engine with oil and the No. 60 Ford was back in the race 33 laps down. The Paschal team finished the race, officially in 30th place, but John likes to think he was 16th.  You see, NASCAR had two Grand National divisions back then, Hard Tops and Convertible, and this race had both cars, so John Paschal’s car was the 16th place Hard Top to finish the race.  After the race was over, and John had collected his $100 winnings, he also had a bill for his tires, parts and fuel for the race, which far exceeded his winnings. He mentioned to Bill France Sr. that he was going to have to find a buyer for his 1957 Ford tow car, to pay the bills. France smiled and told him that his secretary was in need of a car and he bought the car on the spot.  With his bills paid and a few extra dollars to spare, he found another racer to ‘hitch a ride with for himself and his racecar to get back home to New Jersey.  “Oh, and about that oil filter“, John recalled, “This short guy comes up to me after the race, he was a true race fan and he understood and seemed to appreciate that he had ‘helped’ one of the race teams. He was also very thankful for the note giving him the heads up.”

Although the records available show this as John’s only NASCAR race, he talked about other races he ran including the 1958 race at the Polo Grounds in New York city, the 1960 Road Course race at Montgomery Air Base in NY, Heidelberg Raceway in New Jersey and a few others during that era. 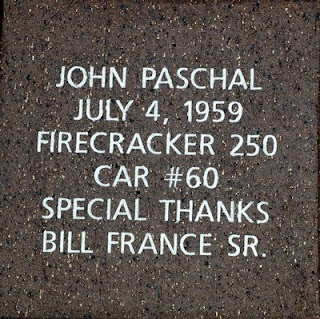 Back to present day and the ‘Reunion’, it took place on Wednesday June 23 at the NASCAR Hall of Fame in Charlotte, NC. When it was announced a couple of years ago that the Hall of Fame would be offering a ‘Commemorative Brick Program’, Tom Paschal wanted to honor his brother with one.  He contacted their sister, Johanna Paschal Cavalli and she began the process to order the brick and to get the information needed to get just the ‘Right’ inscription on the brick. 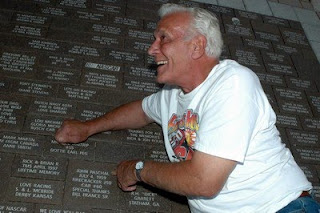 In January of 2009, she contacted this writer asking for help as she was having some problems gathering information. I did a bit of research on my own, sent it along to her and wished her luck.  She thanked me for the help and I didn’t hear back from her until Monday June 21, 2010.  It was at that time she told me about the ‘Brick’ and that the family was all gathering Wednesday at the NASCAR Hall of Fame to see the brick. My plans suddenly changed for that week and I got a chance to relive that era from my childhood with the Paschal family.

Meeting in Charlotte would be John Paschal, now of Mine Hill, NJ, Tom Paschal of  Sacramento, CA., sister Johanna Cavalli of Palm Coast, FL and John’s daughter Sonja Kuntzelman and family of Hertford, NC and his son J. Tom Paschal of Greer,SC. 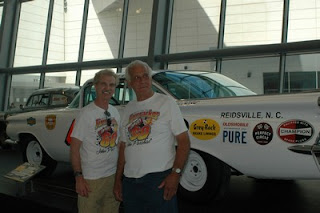 Tom and John at the NASCAR Hall of Fame with Lee Petty’s car from the 1959 Firecracker 250.