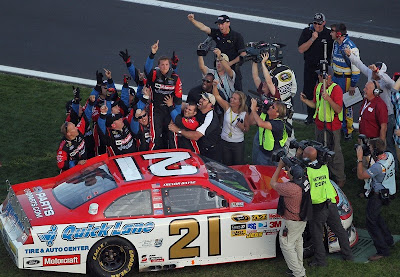 Racing for the Wood Brothers, Bayne put the famed #21 into victory circle for the first time in 10 years and first time in the Daytona 500 in 35 years! It also gave Ford it’s 600th win in the Sprint Cup Series.
Bayne becomes the youngest winner of the Great American Race as the age of 20 years and 1 day.
Coming in second was Carl Edwards followed by David Gilliland, Bobby Labonte and Kurt Busch.
The win came in Bayne’s first ever start in the Daytona 500 and second career Sprint Cup Start. The only driver to win in his first Cup start was Lee Petty and the only other driver to win in his second career Cup start was Jamie McMurray.
The race was slowed by a record 16 cautions. Despite the record number of cautions, the race had a record number of lead changes at 74.
The pivotal moment of the race came on the next to last restart. Bayne was second with David Ragan starting first. Ragan elected to start on the outside. When the green flag flew, he jumped down in front of Bayne (an arrangement the two had made) to keep their “pod” moving. Unfortunately, NASCAR deemed he jumped down too early and black flagged him ending Ragan’s chance at winning his first career race.
The race was marred with crashes and engine issues for the ECR engines. After two weeks of practice and preparation, the debut of the #29 Budweiser Chevy only made it 22 laps before the engine expired resulting in a 42nd place finish. Harvick was home and watching from his couch before the checkered flag even flew. Luckily for Harvick, many of the contenders for the Sprint Cup also suffered issues throughout the day.
The big crash occurred on lap 29 when Michael Waltrip bumped David Reutimann. Reutimann spun and collected a total of 17 cars including Sprint Cup contenders Jeff Gordon, Jimmie Johnson, Mark Martin and Brian Vickers.
I wrote an article earlier this week about the potential “fairytale ending” for the Daytona if Dale Earnhardt Jr. won. Well, I believe the win by Trevor Bayne would suffice as a fairytale ending as well. It’s a testament that good guys can win and if you keep working towards your dream, you can succeed.