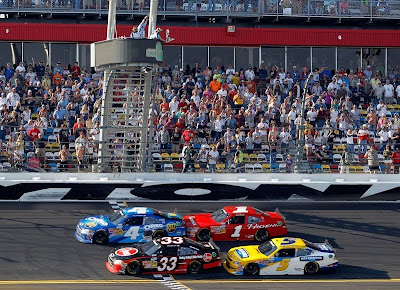 Tony Stewart notched his sixth NASCAR win, and his fourth win in a row in the NASCAR Nationwide Series Saturday at the famed Daytona International Speedway.
Stewart suffered a cut tire during the final caution period of the race forcing him to pit and restart the race in P11. Lucky for Stewart, Landon Cassill was restarting in front of him. The two sliced their way to the front and Stewart edged Clint Bowyer by .007 seconds; the third closest finish in nationwide history!
Landon Cassill had his best career finish coming home third followed by Dale Earnhardt Jr. and Reed Sorenson.
The race was slowed 5 times for 23 laps. The most significant of these incidents came on lap 105 when Landon Cassill drifted down into the right front fender of Brad Keselowski. This sent Keselowski spinning wildly through the infield and into the car of Josh Wise ending Keselowski’s streak of races without a DNF at 102.
For the most part of the race, the Sprint Cup regulars dominated. It was clear the practice they have had all week paid dividends and the front of the field was broken into pairs. At one point, the pairs of Joey Logano/Kyle Busch and Trevor Bayne/Brad Keselowski were over 12 seconds ahead of the fifth place car.
One thing is for certain, the 2011 Daytona 500 is shaping up to be one of the best in recent memory!