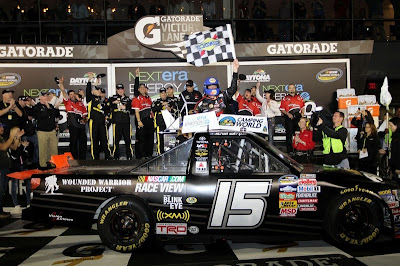 Ten years ago today, Michael Waltrip won the Daytona 500 and didn’t’ really get to enjoy it. When he was in Victory Lane, Ken Schrader came to tell him Dale Earnhardt was in trouble. Several hours later, we found out that we had lost Dale Earnhardt.

Flash Forward 10 years, February 18, 2011. Michael Waltrip got a one race deal in the truck series to just run the Camping World Truck Series race to honor his friend Dale Earnhardt.

The NextEra Energy Resources 250 started dull, as James Buescher led the first 55 laps. It appeared the outside line was not the place to be as 30 trucks ran in a single file line.

The first “big one” occurred on lap 75 when the 5 of Travis Kvapil appeared to cut a tire collecting the trucks of Todd Bodine, Ron Hornaday Jr. and others. In the same accident, Donnie Neuenberger inexplicitly ran into the back of several trucks in the second pack collecting many more trucks. In the end, 14 trucks were involved.

After pit stops, the field was set for a run to the finish that would prove to be exciting!

James Buescher decided to take Fontaine and Busch three wide with four to go in an effort to get the lead. As he did, a couple trucks behind him made contact igniting a 14 truck crash that damaged all but five trucks.

As is usual for Camping World Truck Series races, The NextEra Energy Resources 250 was going to overtime!

Elliott Sadler was leading as the field took the green flag with Michael Waltrip on his outside. When the trucks took the white flag, the trucks of Waltrip and Sadler did something that hadn’t been done all race; they broke out in a two car [truck] tandem ensuring the race was going to come down to the two of them.

Coming out of four, Waltrip jumped to the high side and appeared to get a huge run and passed Sadler to win on the 10 year anniversary of the only Daytona 500 in which the winner didn’t get to celebrate.

Sadler wanted to win, but if he couldn’t he was OK with Waltrip winning.

“I went to victory lane to congratulate him,” Sadler said, “and I said to Michael, ‘If anyone deserves to win a race today, you do.’ ”

Rounding out the top 5 were Clay Rogers, Miguel Paludo and Kyle Busch.

Coming in sixth was Jennifer Jo Cobb, marking the highest finish ever for a female in the Camping World Truck Series.

“It was a bitter sweet day.” Cobb said “We honored Bruce (transport driver Bruce Cover, who died recently of cancer) and my Grandpa tonight and fought after a blown engine to come from the back. My crew never crew never gave up and I’m a happy girl.”

When Waltrip was on his cool down lap it became clear that something wasn’t right with Waltrip’s truck. One side of his spoiler was lying flat, which is clearly a rules violation. Upon reviewing the replay, it appears the spoiler laid flat sometime during the final lap. Whatever the verdict, seeing the true emotion of Michael Waltrip in Victory Lane on this, the 10 year anniversary of Dale Earnhardt’s death, brought back many memories and emotions from NASCAR fans everywhere.

Waltrip becomes the 22nd driver to win a race in all three of NASCAR’s national series.