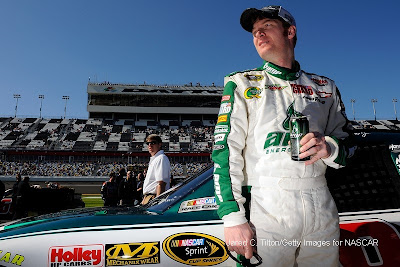 By Shaun Burke
Is the 2011 Daytona 500 shaping up to be a Hollywood ending for Dale Earnhardt Junior? Junior doesn’t think so: “I understand the situation.” said Junior “I’m looking forward to seeing how my father’s remembered and honored throughout the week. I’ll enjoy that. I don’t really get into the hypothetical, fairytale sort of stuff.”
Jeff Gordon feels differently, however. “Things are certainly lining up in an interesting way. I mean, he pulled the pole for the Bud Shootout, wins the pole for the Daytona 500, the lights went out the other night [during final Budweiser Shootout practice]. Some strange activity happening around Daytona right now.”
Even the most casual fan knows this significance of this race to Dale Earnhardt Jr. It was ten years ago that Junior finished second in the Daytona 500. As he got out of the car, he was quickly whisked to the hospital where he was given the news that anyone would hate to hear: His father had been killed.
Dale Earnhardt Jr. comes to Daytona after two years of struggles and disappointment. In 2009, he managed only two top 5s. In 2010 he had 3. In the off-season, Rick Hendrick shuffled the crew chiefs at Hendrick Motorsports in an effort to spark change in his three struggling teams; in 2010, Jimmie Johnson was the only Hendrick Motorsports car to win a race. We’ve seen this done before by Jack Roush and even DEI when Junior and Waltrip traded teams in 2005. While it has always produced a small spark, it has had mild success. Junior went from six wins in 2004 to one in 2005. Waltrip didn’t win either year.
Sunday also marks career start 400 for Dale Earnhardt Jr. Only 47 drivers have ever started 400 NASCAR Sprint Cup races.
When Junior won the pole for the Daytona 500 Sunday, he guaranteed that he will lead the field to the green in every Sprint Cup event he participates in this weekend. One would expect being locked into the pole position for the Daytona 500, Junior would race conservatory to preserve his car. “I think personally when you do lock in a front-row starting spot for the 500; it takes a lot of pressure off. You get to go out there and try to win that race with just as much urgency to win it, but kind of in your own way.” said Earnhardt “I can go out there and make that move at the last lap that I think might win the race even if it don’t. I can do the things I want to do and won’t feel handcuffed at all.”
NASCAR races involving significant Dale Earnhardt events always find a way of having a Hollywood ending.
In the very next race after Dale Earnhardt’s death, Steve Park won the race and ran out of gas on pit road coming to victory lane.
In the fourth race and third of Kevin Harvick’s career, Harvick held off Jeff Gordon at Atlanta to win for Dale Earnhardt’s old team.
In July 2001, Dale Earnhardt Jr. dominated the Pepsi 400 at Daytona. After the race, he and teammate Michael Waltrip celebrated in the infield after a 1-2 finish.
I am sure Dale Earnhardt Jr. doesn’t want to think about the pressure of winning this race, but one thing is for sure: NASCAR badly needs Dale Earnhardt Jr. to be the 2011 Daytona 500 champion and Dale Earnhardt Jr. needs to get back to victory lane.
Ten years after Dale Earnhardt died; I can look back and say that’s the day NASCAR peaked. If Dale Earnhardt Jr. wins this year’s Daytona 500, I think we can look back in 2021 and say “That’s the day NASCAR started coming back.”
One thing is for certain: fans need to tune in for the Daytona 500 this Sunday on FOX. You may just see a fairytale ending.