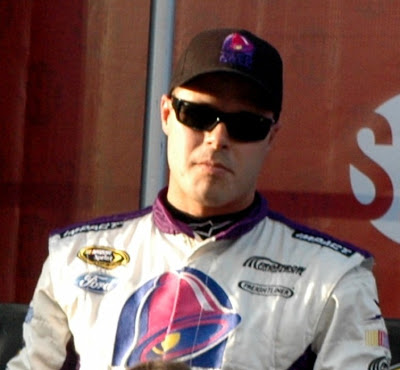 David Gilliland has to relate strongly with the late comedian Rodney Dangerfield’s catch-phrase “I get no respect, I tell you. No respect.” The guy finishes 3rd in the Daytona 500 in a car that had largely not been a factor all day and both of his team-mates had their share of problems… and yet FOX Sports totally ignores the guy in the post-race coverage. Sure, they interviewed him, but it wasn’t shown on the telecast, which is an epic fail on FOX’s part. While Trevor Bayne, and rightfully so, has garnered much of the Cinderella head-lines, poor David Gilliland has been treated as if he is persona non grata when his run in the 500 was just as much of a Cinderella story in a career that has already had a pretty spectacular Cinderella moment.

Gilliland started his career working for his dad, Butch Gilliland, in his shop. He started to make a name for himself in what is now the Auto Zone West Series as he proved to be every bit as good, if not better, than his father Butch was. In 2005, he grabbed the attention of NASCAR owners after winning the prestigious Toyota All-Star Showdown when apparent winner Mike Olson’s wheels were found to be too light, leading to a win by disqualification for Gilliland. In 2006, Gilliland scored the biggest upset in Busch Series history at Kentucky Speedway. Gilliland only had one prior top-30 finish for Clay Andrews racing in four starts, but on that night, his car was on a rail as it blew past J.J. Yeley in the closing stages and took home a win that caught a lot of attention from Cup owners such as Richard Childress and Robert Yates. Yes, it seemed like all was well for David Gilliland.

But the next few years in Cup, outside of the rare top 10 here and there and a few pole positions, were a baptism by hell-fire and brimstone for Gilliland, whose most notable moment at Robert Yates Racing was intentionally wrecking Juan Pablo Montoya in a straight-away at Texas. After two largely ignominious seasons with Robert Yates, Gilliland bounced around with five different teams in 2009, struggling to find a home. But in 2010, Front Row Motorsports owner Bob Jenkins reunited Gilliland with former Yates Racing team-mate and 2003 Craftsman Truck Series champion Travis Kvapil. But Gilliland only posted two top 20 finishes all year, with both being 19th place finishes at Martinsville and Sonoma respectively and his being retained for 2011 was merely an after-thought.

His Gatorade Duels were anything but spectacular as he was caught up in some problems in his Duel race, leaving him starting far back in the field in the “Great American Race”. And for much of the day, no one really gave much thought to Gilliland, especially after team-mate Robert Richardson Jr. was inadvertantly crashed out by team-mate Travis Kvapil, who had a Murphy’s Law type of afternoon, being involved in some manner, in four caution flags on the afternoon. But at the end of the race, Gilliland was still on the lead lap amazingly. But still, very few paid him any real mind. But on the final lap, he came out of nowhere to push Carl Edwards toward the front but Edwards and Gilliland had to settle for 2nd and 3rd respectively, earning Gilliland some much-deserved vindication from all the people who said he had been rushed up to Cup too soon.

Gilliland credited the turn-around of the team to the new cars they bought from the now-defunct, George Gillett-backed Richard Petty Motorsports and the new Ford FR9 engines supplied by Roush-Yates. But this performance, while not a win, certainly has to be an enormous turn-around for a team that struggled to break the top 30 at times last year. While Gilliland might not ever win a race on NASCAR’s top level, he at least proved he does belong with the big boys of racing and for that, he should be commended. Gilliland won’t get the headlines Trevor Bayne has had after Sunday’s race, but he’s earned the respect of his peers, which is just as good as a Daytona 500 win.