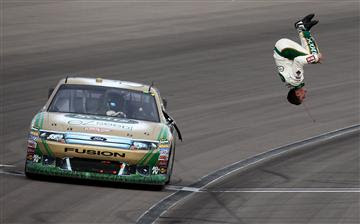 Carl Edwards topped off what was a Ford weekend in Las Vegas by winning the Kobalt Tools 400. The win is Edward’s nineteenth career win and second at Las Vegas. Edwards has now won three of the last five Sprint Cup races.
Tony Stewart dominated the Kobalt Tools 400 leading 166 of the 267 laps. Stewart had a miscue on pit road on lap 159 when he drug and air wrench out of his pit box. The penalty relegated Stewart to 24th position. Stewart struggled deep in traffic but managed to work his way inside the top 15 when Jeff Gordon pounded the wall on lap 196.
Stewart’s crew chief Darian Grubb made a gutsy call and took only two tires giving Stewart the led again. Most fans and even competitors thought that Stewart would be a moving chicane; however, Stewart was faster than the cars that took four tires. Stewart pulled out to over a four second lead when it was time for the final pit stop.
Since Stewart took two tires to get the lead, he had to take four tires on the final while Edwards was able to take two. When pit stops were over, Stewart sat third behind Edwards and Juan Montoya. It took Stewart several laps to get around Montoya and he ran out of time and couldn’t catch Edwards, finishing just 1.25 seconds and in second position. Stewart was clearly frustrated after the race saying “Second sucks”
Behind Edwards and Stewart, Montoya, Marcos Ambrose and Ryan Newman rounded out the top five.
Las Vegas was not kind to the hometown Busch brothers. Kyle Busch cut a tire running in the top 5 and a few laps later had an engine explode. Kurt, while racing inside the top 5, got loose under Juan Montoya and spun. Kurt was able to make his way back to a ninth place finish and is now tired for the points lead with Tony Stewart.
Jimmie Johnson, who had won the last two Las Vegas races, was never a factor going a lap down midway through the race. He finished sixteenth.
The NASCAR Sprint Cup and the Nationwide Series both take a week off as the Camping World Truck Series heads to Darlington Raceway for the Too Tough to Tame 200 on Saturday. The Sprint Cup and Nationwide Series next races will be March 19 & 20 at Bristol Motor Speedway for the Jeff Byrd 500 and the Scotts EZ Seed 300.