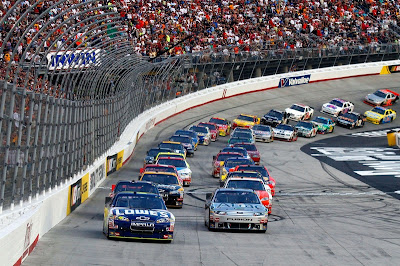 Last spring, Bristol Motor Speedway saw the end of it’s 55 race sellout record.  It was a rude, though not totally unexpected wake up call for the track and NASCAR as a whole.  The signs of a problem began to surface long before that date arrived.
The United States began to see serious signs of an economic downturn in late 2008. That shock to the country occurred after most NASCAR fans, teams track and sponsors had already made the financial commitments to the 2009 race season.  Unlike many other sports, it’s was not uncommon for NASCAR fans to purchase race tickets and  make travel, hotel and vacation plans a full year in advance.  However, some of the tracks did see impact on season ticket sales.
Bristol, whose season tickets renew in October immediately felt the impact when renewal suddenly stopped coming in.  They were quick to respond and for the first time established a payment plan for season ticket holders.  That idea was well received and although the season ticket sales did fall, there were a great number of late renewals opting for the payment plan.  2009 continued the ‘sell out’ history for Bristol although it did require more work by the track.  For the first time in memory Bristol tickets were available all the way till race week.  The efforts didn‘t end with the payment plan though, a strange sight became common throughout Tennessee, BMS vans were suddenly seen in Food City Supermarket parking lots, selling race tickets. It took some last minute sponsor buys, but the ‘Sold Out’ sign for Bristol held on for another year.
2010 became the year of panic for NASCAR, beginning with the Daytona 500 empty seats were ever present at the races,  Bristol for the first failed to sell out it’s Cup races and TV rating were falling.  While I was at the Bristol spring race, I took some time to check out the local business’.  The hotel rates remained high as did the minimum stay requirements.  The local restaurants and stores continued with their ’race week’ inflated prices.  A check of the area campgrounds showed no lowering of their rates, even though the empty spaces were obvious.  I spoke with a couple of the campground operators and though they were polite, they felt no need to roll back their prices.
I was not the only person that noticed the local business’ ignoring the financial plight of race fans, the folks at Bristol Motor Speedway did too.  Director of Public relations Kevin Triplett spearheaded a campaign to enlist the help of the local hospitality folks.  His initial efforts in approaching the hotel industry met with less than stellar  results,  enlisting only five hotels willing to lower rates and minimum stay requirements. Those five are,  The Ameriinn Lodge in Jonesborough, TN, The Comfort Inn at Abingdon and Bristol, VA., The Comfort Suites in Abingdon and the holiday Inn Hotel and Suites in Bristol, VA.
Working with Jerry Caldwell, BMS Executive Vice President and General Manager, they enlisted the help of the Bristol, Kingsport and Johnson City Chambers of Commerce as well as the Northeast Tennessee Tourism Association.  In this second round, American Classic Suites, in Johnson City, the Comfort Suites, Holiday Inn Express and Red Roof Inn, all of Kingsport, Days Inn Abingdon, VA and the Travelodge in Bristol, TN all agreed to lower rates and reduce the minimum stay.
Race Lodging, a local agency that has been active for several years in the Bristol area arranging lodging alternatives such as rental of rooms and sometimes entire homes for race fans, also became part of the effort.  In addition to their normal activities they are putting together lodging facilities in outlying areas and are also arranging for shuttle bus service for those fans.
On the Camping end of the deal, it appears that the efforts have been less successful.  It seems that the track has reached out to several of the campground operators in the area  but those calls have fallen on deaf ears.  The campgrounds surrounding Bristol Motor Speedway have all advertised their pledge to be Fan Friendly, however Actions speak much louder than Words and the word seems to be screw the race fans.  Not a single campground operator was willing to lower their rates as of this writing.
Bristol Motor Speedway has long been known as one of the most fan friendly track in NASCAR.  This latest effort show that they intend to live up to that name, and I for one believe that those efforts will continue into the future.  If you’re a local business and vendor that has not agreed to work with the track, beware because the war to bring back the fans has only just begun.