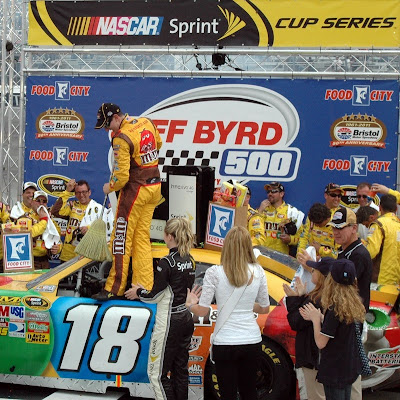 Dominance, thy name is Kyle Busch. At least at Bristol as Busch held off a late race charge from Carl Edwards and Jimmie Johnson to win his 5th straight NASCAR race at Bristol in the Jeff Byrd 500 Sunday afternoon. Kyle led seven times in the race for 153 laps, again having one of the more dominant cars in the race along with Jimmie Johnson, who led the most laps, leading four times for 164 laps. On the weekend, Kyle led 422 of the week-end’s 800 laps, averaging close to leading 53 percent of the laps completed this week-end at Bristol.

Carl Edwards won the pole for today’s Jeff Byrd 500 presented by Food City, clocking in at 128.014 mph on Friday with team-mate Greg Biffle starting to his outside leading the other 41 cars to the green flag. Edwards jumped out to an early lead and held it until lap 18 when Paul Menard took the lead. The first caution came out for a 7-car accordion effect incident on lap 28 when Jeff Burton slowed after bouncing off the wall, collecting Denny Hamlin, Brad Keselowski, A.J. Allmendinger, Jamie McMurray, David Reutimann, and Brian Vickers, putting Vickers behind the wall.

As the race went back to green, Landon Cassill pulled off the track on lap 32. He came back out for four laps later on before parking for good. Three laps later, Michael McDowell blew his engine in one of the rare races this year that HP Racing had planned to run in this season. Menard and Jimmie Johnson battled hard until the lap 50 competition caution to check for tire wear. After pit stops, David Gilliland, Robby Gordon, and J.J. Yeley stayed out to take the top 3 spots with Tony Stewart and Ryan Newman taking the 4th and 5th positions after pit stops. On lap 58, Ryan Newman took the lead from Gilliland and held it until lap 84 when Kyle Busch took the lead. Busch’s stint up front lasted for eight laps when Kyle Busch took the lead.

On lap 128, the event’s third caution came out when Robby Gordon smacked the wall in turn one when a right front tire went down. After pit-stops, Truex Jr. held on to the lead with Jimmie Johnson 2nd, Kyle Busch 3rd, Kevin Harvick 4th, and Kasey Kahne 5th. Shortly after the race went back to green flag racing, Brad Keselowski, as the result of a flat tire, spun out without any more contact for the 4th caution of the afternoon. After Truex led for 63 laps, Kevin Harvick took the lead on lap 155. The next lap, Casey Mears pulled behind the wall with electrical issues. On lap 192, Jimmie Johnson wrested the lead away from Harvick.

On lap 228, Casey Mears pulled back onto the track after the repairs to his car were made. The 5th caution of the afternoon came from an incident between Bobby Labonte and Paul Menard on lap 246. Labonte had made contact with Menard the previous lap and was repaid with an intentional spin of Labonte. In the aftermath, Tony Stewart ran into the back of Ryan Newman. After pit stops, it was Jimmie Johnson still leading, Kyle Busch 2nd, Harvick, 3rd, Kasey Kahne 4th, and Carl Edwards rounding out the top 5. Juan Pablo Montoya had an impressive charge from 36th to 8th thwarted by a loose right front wheel on lap 265, costing him 2 laps after a green flag pit stop. Five laps later, Kyle Busch took the lead for the fourth time of the afternoon.

Two laps later, local boy Trevor Bayne slapped the wall slightly but kept going and there was no caution. Kyle Busch would hold the lead for the next 70 laps until Jimmie Johnson took the lead back. Two laps later, the 6th caution came out for debris on the front-stretch. After pit-stops under the caution, Johnson retained the lead with Kyle Busch 2nd, Kurt Busch 3rd, Kasey Kahne 4th, and Harvick 5th. On lap 378, Dennis Setzer pulled the #92 K–Automotive Dodge behind the wall for the rest of the day.

The 7th caution of the afternoon came out after David Gilliland hit the wall in the #34 Taco Bell Ford Fusion on lap 428. The caution led to pit stops with Kyle Busch taking the lead at lap 430 with Carl Edwards 2nd, Greg Biffle 3rd, Jimmie Johnson fell to 4th, and Kevin Harvick rounding out the top 5. There was some controversy in the pits when it appeared that Jimmie Johnson sped on pit road to pass Kevin Harvick and was not penalized, a rather curious call to say the least. Shortly after the restart, the 8th caution of the day came out following contact by Kasey Kahne to Kevin Harvick, who looped his car in turn 3 after nearly saving the car. Collected in a melee trying to avoid the crash were Jamie McMurray, Clint Bowyer, Juan Pablo Montoya, Mark Martin, and Trevor Bayne, spoiling the homecoming for the Knoxville native.

Caution number nine came out when Travis Kvapil looped his car on lap 450. He continued without making any additional contact. Seven laps later, as a result of his incident 20 laps before, Clint Bowyer cooked his engine, ending his afternoon. In the closing stages, the race became a three-car blanket consisting of Kyle Busch, Edwards, and Johnson. Edwards took the lead briefly on lap 474 but Kyle retook the lead on the next lap. From there, Kyle Busch checked out and went on to win his 5th straight win at Bristol by 0.946 seconds, with Edwards settling for 2nd and Johnson 3rd. Matt Kenseth and Paul Menard, with his best run of the year, rounded out the top 5. Kevin Harvick recovered from his late-race incident to take home 6th place, Kurt Busch was 7th, Greg Biffle was 8th, Kasey Kahne was 9th, and Ryan Newman rounded out the top 10.

In a remarkable stat, the Busch brothers have now won half of the last 18 races at Bristol Motor Speedway. Kyle Busch led seven times for 153 laps to take home his 5th straight win at Bristol. The average speed of the race was 91.941 miles per hour and there were 10 cautions for 57 laps. The listed attendance for the event was 120,000, which was about 40,000 seats short of a sell-out.