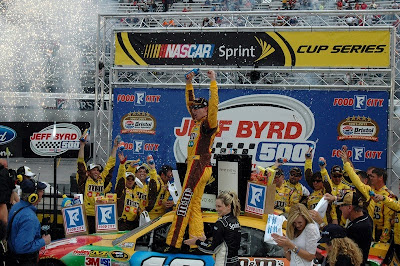 Love him or hate him, one cannot deny the fact that Kyle Busch, after winning the last five races at Bristol in the last two weekends, has officially earned the title “The Baron Of Bristol” with his dominating performance this week-end at Bristol. After leading all but 32 laps in the Nationwide Series Scotts E-Z Seed 300 on Saturday to win his 4th straight race at Bristol, people immediately started to pencil in Kyle as the favorite for Sunday’s race. And, while he had to share the “class of the field” honors at Bristol with Jimmie Johnson, leading seven times for 153 laps while Jimmie Johnson led four times for 164 laps, he managed to pull away down the stretch and win his 5th straight NASCAR race at Bristol.

With the win, not only does Kyle assert his dominance at Bristol, but he establishes himself as a legitimate championship contender in 2011. Call it maturity, call it more focus on his career, call it whatever one desires, but the fact that Kyle has, outside of a blown engine at Las Vegas, has ran especially well in every series that he has competed in so far in 2011. That dominance has been prevalent in the Nationwide Series, with his 45 career wins in 204 career starts, which is almost an average winning percentage of 1 out of every 4 races he enters in that series. While his Cup track record hasn’t quite been as dominant, one cannot help but be impressed at, not just the fact that Kyle has more natural talent than any other driver in NASCAR, but at the maturity he’s shown to date in 2011.

Early in the season, Kyle avoided potential disaster after an early race spin at Daytona and recovered to finish 8th with a damaged, ill-handling race car. At Phoenix, for much of the race, Kyle had the car to beat until Jeff Gordon passed him with 8 laps to go to ultimately win the race. Kyle had a bit of a hiccup at Las Vegas when his engine imploded on him, turning his car into a ball of fire. But at Bristol, it was clear that Kyle had one of the two most dominant race cars of the afternoon and at the end, showed the most muscle after a brief late-race charge from Carl Edwards and pulled away in the late stages to win the race.

Being married to his new wife, Samantha, seems to have somewhat tamed the petulant beast that Kyle has been in the past and, in situations so far this year that he would have reacted childishly in the past, he seems to be more level headed. Case in point, at Las Vegas when his motor detonated on him, he remained relatively calm about it, even almost joking about it. He Kyle Busch of old would likely have gone on a public tirade toward his engine building department at Joe Gibbs Racing. While a Jimmy Spencer right-hook seemed to mellow out Kurt Busch, it appears that married life has been what has calmed Kyle down.

When all the dust and smoke settled at the end of the day at Bristol, it was apparent that the maturation of Kyle Busch is at least in a constant state of evolution. His fans like to point out, however misguided the comparison may be, that Kyle is the modern equivalent of Dale Earnhardt Sr. Truthfully, Kyle’s talent and attitude, at times, are much more reminiscent of a younger Darrell Waltrip. Before he was spouting off catch-phrases in the FOX announcing booth, Waltrip had a much similar effect on fans, in a polarizing manner, that Kyle has been known to have in the past. He also could drive the wheels off of anything he drove in, also like Kyle. Now will Kyle be a NASCAR great on the level of a Darrell Waltrip or a Richard Petty? Only time will tell on that issue.