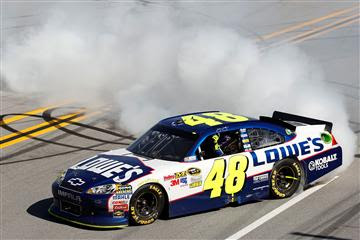 Jimmie Johnson made a daring three wide last lap pass in the Aaron’s 499 to score his 54th career victory.
Johnson received a great push from team mate Dale Earnhardt, Jr. and afterwards gave Junior the flag as a “thank you” for pushing him to the win. “Well I got it and gave it to him.” Johnson said, “He’s got the checkered flag over there and I can’t wait to tilt a cold one back with him and thank him for a good job done today.”
Johnson had high praise for the new two car tandem and believes it put on one of the best plate races in recent memory. “We have a ton of passes for the lead and statistically you look at the race and it looks pretty awesome.” Said Johnson, “You can make stuff happen and there is a technique required to stay together. It puts it back in the driver’s hands. I don’t remember people excited about the way it was before. I thought there was a lot of racing that took place. I thought it was a great race.”
The winning pass came when the duo of Jeff Gordon/Mark Martin and Clint Bowyer/Kevin Harvick were racing side-by-side allowing Johnson/Junior to suck up in the last stretch. “I had a good run into three but nowhere to go.” Says Johnson, “By the time we got back to the tri-oval, we had another big run going and those guys were worked about side-drafting each other. The bottom was wide open for us and we rallied our way through there.”
Bowyer was clearly disappointed in finishing second. “You know, that win could have put me in the Chase.” Said Bowyer, “It’s never very good to know you made NASCAR history by losing. Sooner or later I need to start making history by winning.”
When asked about the tandem racing, Bowyer shared Johnson’s general positive opinion. “It doesn’t matter what happened throughout the race.” Says Bowyer, “If you didn’t like that finish and it didn’t make you forget about the race, you’re crazy.”
Jeff Gordon, today’s third place finisher, said Talladega races are always shootouts. “Talladega has always been about a 15-25 lap race.” Gordon said, “The rest is just trying to get to the end.
Gordon spent much of the race at the back of the pack before making a surge late in the race. “If you want to survive and you want to make it to the finish, you have to either choose to try to push to stay up front or ride in the back. Being in the middle is not worth it.”
Today’s Aaron’s 499 was a record tying race. The margin of victory, .002, tied for the closest in NASCAR history and the lead changes, 88, tied for most every in a Sprint Cup Series race.
The race never featured the infamous “big one” as drivers gave each other room all day. There were, however, many drivers that suffered the wrath of Kurt Busch’s front bumper. The first occurred on lap 28. Busch was pushing rookie Landon Cassill when Cassill spun into the car of Brian Vickers. Cassill continued on several laps down while Vickers went behind the wall to repair the damage.
The second incident with Busch was on lap 90. It appeared the car of David Ragan lost and engine and Busch turned team mate Brad Keselowski. The incident collected six cars and was relatively small by Talladega standards.
The third strike by Busch occurred on lap 185 when Kurt gave potential winner Dave Blaney a hard hit and sent Blaney through the infield grass.
Carl Edwards brings a five point lead over Jimmie Johnson into Richmond in two week. Dale Earnhardt, Jr., Kevin Harvick and Kurt Busch round out the top ten.