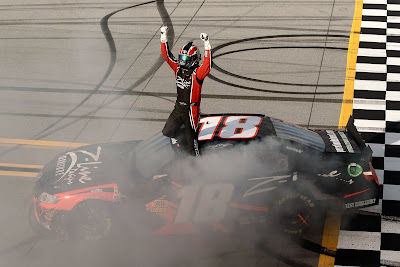 Sometimes a driver is good; sometimes he is lucky. In 2011, Kyle Busch has been both.
Kyle Busch cruised to victory after two attempts at green-white-checkered. The race titled the Aaron’s 312 was extended to 330 miles. Joey Logano pushed Busch to the victory and has now finished on the podium in all three career Nationwide races at Talladega.
On lap 88, it appeared Busch’s race was over when he was in the middle of “the big one”. What started as contact between Clint Bowyer and Busch resulted in Busch slamming into the side of Michael Waltrip. Waltrip spun across the track and collected 21 cars in total. Waltrip was clear in what he thought caused the crash. “The No. 2 decided that he would manipulate the restart so that the No. 1 could get behind him” said Waltrip, “It’s the way you race, but the No. 1 and the No. 2 messing around got me crashed.”
The resulting crash cause significant damage to the car of Busch and he questioned whether his car could be competitive. “I got hit three times on the left side and I thought it was killed” said Busch, “these guys did a great job of putting it back together.”
On the last lap, it appeared Joe Nemechek had the run needed to blow past the damaged car of Kyle Busch when the caution came out after a crash on the back straight.
Joe Nemechek finished third, his best Nationwide finish since he won at Kansas in 2004. Rounding out the top 10 were Brad Keselowski and Elliott Sadler.
The field avoided what could have been a huge wreck on lap 70 when point leader Ricky Stenhouse slammed the wall on the backstretch. It appeared the duo of Trevor Bayne and Carl Edwards were moving on the outside line when Stenhouse drifted up. Bayne made contact with teammate Stenhouse and sent Stenhouse head-on into the backstretch wall. Stenhouse didn’t return to the track and finished in 38th position. He dropped to fourth in points, eight points out of the lead.
Stenhouse wasn’t the only championship contender to have trouble in the Aaron’s 312. On the last lap, Jason Leffler made contact with the flipping car of Mike Wallace. The contact resulted in Leffler finishing fifteenth and taking the points lead by two over Justin Allgaier.
After getting off to a very quick start, the Aaron’s 312 began to feel like the race that would never end. Twice, the red flag flew. First after Stenhouse dropped almost all the fluid his car could hold on the track and second after the 21 car crash on lap 88. The race also had two green-white-checkered finishes and ended under caution after Mike Wallace got airborne on the last lap.
The race resulted in a record number of lead changes with 56 smashing the old record of 36 in the 2007 Aaron’s 312.
The win is Busch’s 47th putting him just two shy of Mark Martin’s record of 49.