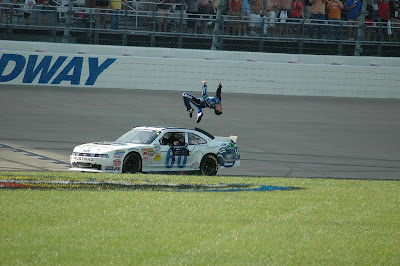 It appeared Nashville Superspeedway belonged to Kyle Busch for much of this weekend; however, Carl Edwards had something to say about that! Carl Edwards cruised to his second win of 2011 in the Nashville 300 Saturday. The win, Edwards’ fifth at Nashville Superspeedway, reasserted Carl’s nickname “Concrete Carl”. This was Edwards’ 40th career nationwide win tying him fourth on the all time Nationwide win list with Jack Ingram. “Early in the race our car was far superior.” Said Edwards, “I could kind of stretch out a lead whenever I wanted to. At the end of the race I was peddling for all I had. The guys on the 18 did a good job of adjusting their car. That was white knuckle driving as hard as I could drive. It was really nerve wracking”
The Nashville 300 was clearly a race of two halves. For much of the first half of the race, Edwards dominated and put the majority of the field a lap down. Everything changed when Steve Wallace spun on lap 135 bringing out the second caution of the event. Following the restart, two more quick debris cautions were displayed on lap 141 and 147. Each restart, the car of Kyle Busch was able to hang with Edwards more and more. Carl appeared to have a slightly better car over the long run and pulled away at the end. “It was a good race for us today” Busch said, “We were fast, just not quite fast enough. We last a little bit in every area and could only muster a second place today.”
The Nashville 300 was the Carl & Kyle show from start to finish. Brad Keselowski hung with the leaders while they were racing for the lead late in the race however came in a distant third. Keselowski who struggled early in the season has now finished in the top ten in six consecutive races. “We didn’t quite have enough speed but we did a good job on pit road.” Said Keselowski, “We didn’t make any mistakes on or off the race track we just need more speed in pretty much all areas. We’re better than we were at the start of the year; we’re not blowing out tires and that’s progress.”
Joey Logano finished fourth with Ricky Stenhouse, Jr. taking the honor of being the highest Nationwide Championship contender by finishing fifth. The fifth place finish leaves Stenhouse, Jr. tied with Justin Allgaier for the series points lead. “This team has to face diversity to win a championship” said Stenhouse when asked about rebounding from a bad finish at Talladega. “To come away with a fifth place finish was good for us but we still need a little more speed to run with Kyle and Carl; I don’t think I’ve ever finished here (Nashville).”