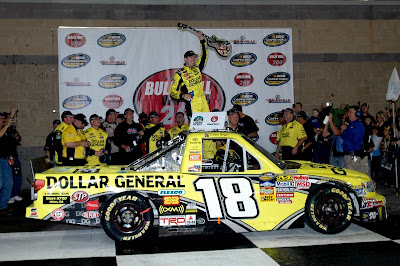 Kyle Busch capped off a dominating day by winning the Bully Hill Vineyards 200 Friday. Starting from the pole, Busch led 140 of 150 laps in route to his second Camping World Truck Series victory of the season. “Our truck was really good.” Says Busch, “Eric (Phillips) did a really good job of adjusting on it.”
After the victory, Busch was greeted to a sight he has seldom ever seen: fans cheered as Busch crossed the finish line. “It was a good show.” Said Busch after the victory “Ron (Hornaday) came up there and made things interesting. He’s a hell of a wheelman. I pulled the same move on him that he pulled on me”
After leading Busch on the final restart with three laps to go, Ron Hornaday faded to finish fourth. “I drove it too hard and wore the tires off,” Hornaday said.
The feel good story of the night was second place finisher Nelson Pique. Pique was the highest finishing rookie coming in second; his first top five finish in NASCAR. “I honestly have no words. I feel like I won” Said Piquet. “At the beginning of the year, we had a lot of adversity that we faced. I think every week, even every lap on the track, I continue to learn. That is what it is all about: learning and getting better.”
Timothy Peters took two tires on final stop and was able to hang on for a third place finish. “We had a hiccup there on pit road” said Peters, “We didn’t get our Tundra full of fuel and we had to come back down with one to go. The tire is so good; it makes everyone so equal that it’s hard to pass here. It was a great call he made taking two tires there towards the end. It goes us up towards the front.” The finish was Peters’ Third straight top ten and positions him second in points, just three points out of the Camping World Truck Series points lead.
The race was a milestone race for Kyle Busch. Not only was it his third career win at Nashville Superspeedway but Busch also led his 20,000th career lap in NASCAR competition making him just the tenth driver in NASCAR history to accomplish such a feat. It also marked the one year anniversary of the first win for Kyle Busch Motorsports. “We’ve come a long ways.” Says crew chief Eric Phillips, “We did a lot of moving during the middle of the summer. I was impressed with the guys to be able to keep their focus. I was nervous about this weekend. We had some of our focus off the truck, doing other things. They brought a great piece and they do a great job every week.”
The truck series will be in action again May 13 at Dover where Kyle Busch Motorsports will attempt to win its fourth race of the 2011 season.