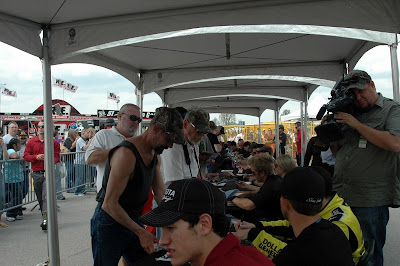 Most fans consider a drivers autograph to be a treasure; a Holy Grail if you will. They stand in the heat or rain for hours for an opportunity to catch a glimpse of their favorite driver and just hope they get a chance to say “Hi” to that driver. Well, for autograph lovers, attending a standalone nationwide race is a great opportunity to get such an autograph with little effort.

Nashville Superspeedway hosted an autograph session for an hour between final Truck Series practice and the first Nationwide practice. The drivers in attendance were a virtual who’s who of NASCAR stars. Kyle Busch, Joey Logano, Ron Hornaday, Todd Bodine, Ricky Stenhouse, Jr., Carl Edwards and Kenny Wallace are just a few of the drivers who attended. 250 wrist bands were handed out starting at 11 am at Nashville Superspeedway. The fans then came back to get in line. Not only did each driver provide a “hero card” but fans were able to bring in their  personal merchandise for drivers to sign. In addition, the fans also had an opportunity to have a casual conversion with their favorite driver. 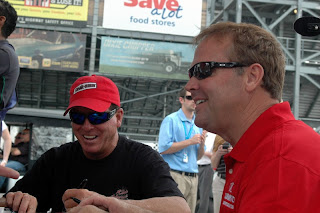