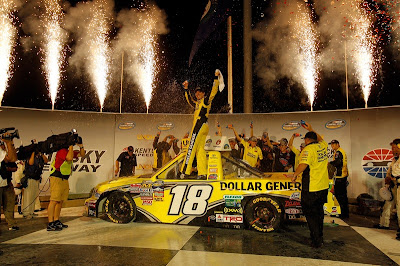 It only took 61 laps for Kyle Busch to charge from last to first to take the win in the UNOH 225.
Busch led 61 laps in route to his 29th Camping World Truck Series race. It was also his 98th career win in the top three series and puts him third all-time in NASCAR wins.
The win wasn’t easy for Busch, however. After being a few seconds late to the drivers meeting, NASCAR penalized Busch and forced him to the rear of the field for the start of the race. Busch maneuvered his way through the field finally taking the lead on lap 61.
Unless you’re name is Kyle Busch, the top of any board was not the place to be tonight. Each of the top five in series points had some sort of incident. Several of the trucks in the top 10 also had disastrous finishes starting with pit stops with around 20 laps to go. Johnny Sauter, the leader pitted with about 20 to go. When he was leaving the pits, he broke his axle and was forced to finish in the garage with a DNF. Nelson Piquet, who was running third, overshot his pit stall and lost several seconds.
With seven laps to go, the 99 truck of Charles Vest stopped at the entrance of pit road. After several seconds of attempting to restart his truck, NASCAR was forced to throw the caution.
On the lap 145 restart, Joey Coulter missed a shift and stacked up the whole field. This resulted in Piquet getting loose and sliding up into the truck of Miguel Paludo. A five truck resulted.
On the final restart, Parker Kligerman was able to jump to the second spot and attempted to chase Busch. The attempt proved futile as Kligerman was unable to get to Busch’s bumper.
Each of the top five in points suffered disappointing nights. In addition to Sauter breaking an axle on the final pit stop, second place points man Cole Whitt was involved in an accident with third place points man Ron Hornaday Jr. Both cars spent considerable time behind the wall repairing damage. Fourth place points man Austin Dillon had his hood fly up during the final 20 laps and was forced to pit to have the hood cut off. Fifth place Matt Crafton’s night ended very early with a blown motor.
Look for more exciting action from Kentucky tomorrow!