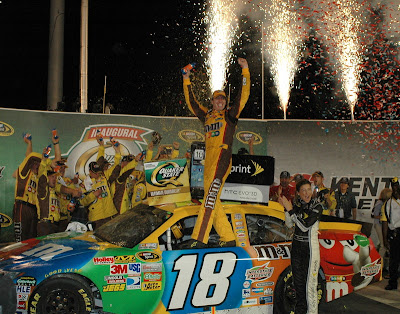 At the conclusion of the inaugural Quaker State 400, it appears Kyle Busch will be about the only person that remembers this race in a positive manor.
After dealing with traffic problems all day, lack of on-track action prompted many fans to leave the track and sit in traffic in a futile attempt to get home early.
Per usual of races lately, there was a great two lap shootout between Busch, David Reutimann and Jimmie Johnson which prompted fans standing on the feet in eager anticipation.
Reutimann finished second followed by Johnson. Coming home fourth was Ryan Newman and Carl Edwards was fifth.
After a late race caution jumbled up the field, points leader Kevin Harvick finished 16th and lost the points lead to Kyle Busch. Busch now leads by 4 over Carl Edwards. Rounding out the top five in points are Kevin Harvick, Kurt Busch and Jimmie Johnson.
Next week New Hampshire hosts the Sprint Cup Series and hopes they can provide some on-track excitement.