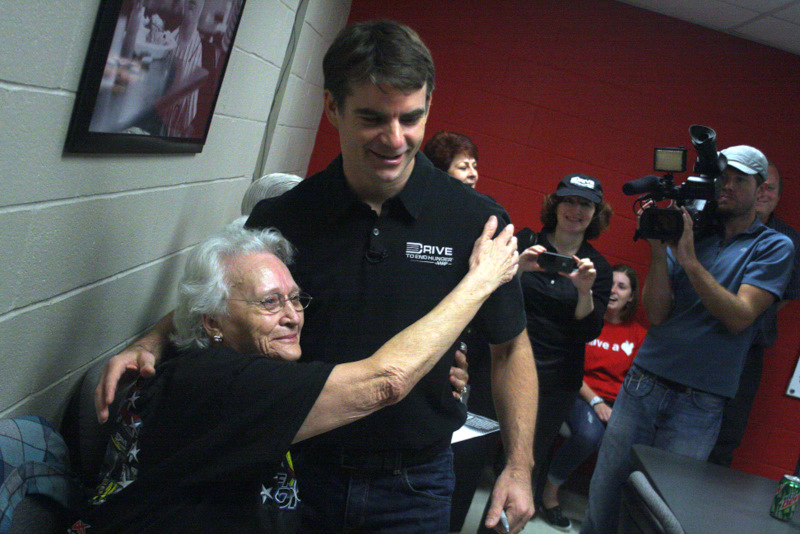 As you all know, I had the privilege of traveling to Charlotte last week for a fantastic race weekend at Charlotte Motor Speedway. But in the midst of the Dollar General 300 and the Bank of America 500 practices, qualifying, and races I was able to bear witness to a bit of a softer side of one of the NASCAR Sprint Cup Series most accomplished drivers.

As you all know, I had the privilege of traveling to Charlotte last week for a fantastic race weekend at Charlotte Motor Speedway. But in the midst of the Dollar General 300 and the Bank of America 500 practices, qualifying, and races I was able to bear witness to a bit of a softer side of one of the NASCAR Sprint Cup Series most accomplished drivers.

On Friday, October 18th, I had the privilege of joining 4-time NASCAR Sprint Cup Series Champion, Jeff Gordon, as he joined forces with AARP-NC, AARP Foundation, and Second Harvest Food Bank in attempt to end hunger in elderly Americans. The event was held in Uptown Charlotte at Second Harvest Food Bank of Metrolina, and was geared at addressing the issue of hunger among vulnerable older adults.

As I pulled into the lot at Second Harvest Food Bank of Metrolina, I was astounded but also excited that there wasn’t a parking spot to be had at the venue, truly a great turnout. The Drive to End Hunger event not only showcased an appearance by the 4-time champ, but the food bank also staffed a drive-through donation site for folks to drive up and donate their canned goods to Second Harvest.

Before Gordon appeared on stage for his appearance, he was given a tour of the Second Harvest Food Bank of Metrolina by the food bank’s executive director, Kay Carter. As Gordon and Carter strolled through the facility, I thought to myself that it really takes a class act to drive for a cause like Drive To End Hunger. Having two young children of his own, Gordon mentioned midway through the tour “Diapers, those things can be good as gold. People really don’t realize how pivotal those can be and you (Second Harvest) have everything accounted for.”

The personal commitment towards ending hunger is really what makes Gordon such a great fit for his sponsor, Drive To End Hunger. “Our Drive To End Hunger program is making progress” said Gordon in a special program about the issue of hunger among older adults. “But there are still too many older Americans struggling with hunger in this country right here in North Carolina.”,  a state that ranks 6th in overall food hardship in the United States. About 1.4 million North Carolinians or 14% of the state’s population suffer from food hardship on a daily basis.

“We at Second Harvest of NWNC are grateful to AARP for their strong support and this generous gift which will help feed our hungry neighbors across Nortwest NC. We thank Jeff Gordon and his race team and AARP for being such a significant part of the solution to the problem of hunger,” said Clyde Fitzgerald, executive director of Second Harvest Food Bank of Northwest North Carolina.

AARP’s Drive to End Hunger campaign is a multi-year commitment to solve the problem of hunger among older Americans. The No. 24 Hendrick Motorsports team has been a part of over $12 million in donations this year in an effort to end hunger, resulting in 3.4 million meals for older adults.

So, you might ask “Well, what can I do to help?” It can be as simple as texting HUNGER to 50555 to give $10 today to AARP Foundation’s Drive to End Hunger. You may also call Drive to End Hunger at 1-855-383-4669 to donate or visit the campaign’s website at www.DriveToEndHunger.org

Not all donations need to be monetary. Simple actions like volunteering at your local food bank, food pantry, or soup kitchen all have an affect on ending hunger. Also, I’ve never come across a food bank or food pantry that turns down nonperishable food items. Another option is to volunteer with AARP and help educate and help older adults to enroll in SNAP/FNS programs that will help keep food on their tables.

It was a great experience for me to see a NASCAR Sprint Cup Series Champion give back to the community. It really takes a certain kind of person to be passionate about his sponsor, and Jeff Gordon truly believes in ending hunger.