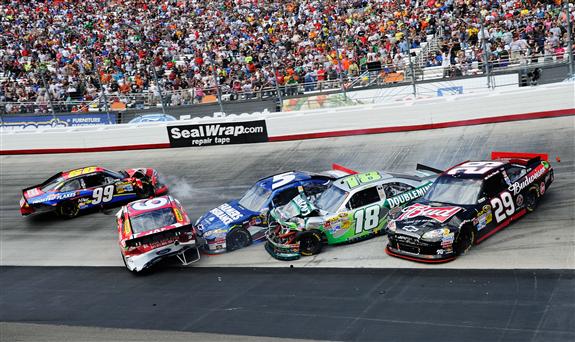 Restart Lap 46 as Allmemdinger pulls ahead of Truex

Lap 255 Kenseth takes the lead while Gordon moves up to second past Keselowski. Keselowski pits.

Lap 258 Kenseth, Gordon and Hamlin pit, handing the lead over to Vickers.

Lap 263 Vickers pits to finish off the pit cycle. Keselowski resumes the lead.

152 to go Kenseth gets the lead from Keselowski

24 to go Caution as Stewart gets into the wall after contact with Brendan Gaughan….Pit stops: Some pit, while some stay out. Keselowski stays out ahead of Kenseth, Vickers and Truex. Earnnhardt Jr. gets a penalty for two fast entering the pits.