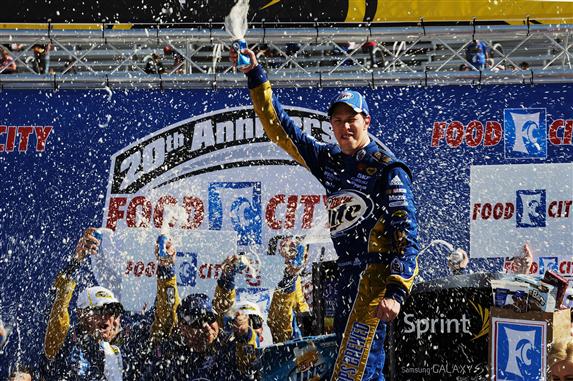 After taking the lead with 110 laps to go, he never looked back as he held Matt Kenseth off, winning the Food City 500.

“I love Bristol and Bristol loves me,” Keselowski said afterwards. “It’s a great track that really demands a hundred percent out of a driver and out of a team.  Today my team certainly delivered.  You could probably argue whether or not I did (smiling).  But it was good.

“Great pit stops.  Had a little bit of damage early on in the race, got it fixed.  Nobody panicked.  It’s tough racing that requires so much discipline mixed in with some aggression obviously. My guys, they made it happen today.  I told somebody before the race, This is the best race car I’ve ever had in Cup.  It showed off today.  Hopefully we can have more cars like this and we’ll win more races and continue to move the needle forward.”

Keselowski started the race in fifth and methodically worked his way to the front, leading 232 laps on the day. It wasn’t an easy day for the driver of the No. 2 Miller Lite Dodge as three restarts in the last 150 restarts had Keselowski working to keep the lead from Kenseth.

“That’s his job not to make it easy on me,” Keselowski said of the hard racing with Kenseth. “That’s just good racing.”

Kenseth would finish second to score his second top 10 on the season.

“If I had been on the top, I may had been able to pin him down there,” Kenseth said of the final restart on lap 483. “But being on old tires, I know he would’ve chose the top. I tried to get under him there, but he was just strong on the top.”

“It was a great day for our NAPA Toyota,” he says. “Just so proud of Michael and Rob and everything they’ve put into this team. We’ve come along away. In the last 10 or 15 races, we’ve had a lot of confidence.”

Clint Bowyer would finish fourth after starting the race in 16th.

Brian Vickers would round out the MWR trio as in his first race for the team as part of a six-race deal.

“When it’s your only one, you got to make it count,” he says. “I’m just proud to be a part of MWR. What an exciting day. (Crew Chief) Rodney Childers bolted my first kart together 20 years ago. He just put together my last one and did a great job.”

There were five cautions on the day with the first caution coming at lap 23 when Kasey Kahne cut Regan Smith off, causing Kahne to spin.

“It’s the worst way I can start the season,” Kahne says. “I’m the fastest car every week and something always happen. I knew when my spotter cleared me in the center that he’d be clear on the exit. I guess I listen too much to my spotter. Discouraged to have fast cars and nothing to show for it.”

The fourth caution came out on lap 361 when contact between Dale Earnhardt Jr. and Gordon cut the left rear on Gordon’s Chevrolet.

“I think we bumped more than we should have is the way it looked like,” Gordon says. “I mean, I guess we bumped at the wrong location, where the tailpipes are. It’s just disappointing. It wasn’t intentional but it ruined our day.”

Earnhardt Jr. would finish 15th after a pit road speeding penalty under his final pit stop.

“I hate what happened to Jeff, we were racing really hard,” Earnhardt Jr. says. “This is one of tracks that you can lean on each other a little bit. That, to me, was good hard racing. The pipes on my car cut the tire down. Otherwise, just frustrated about the finish. We ran better this year than we did last year so things are looking for our team.”

The final caution came with 24 laps to go when contact between Brendan Gaughan and Tony Stewart caused Stewart to hit the wall.