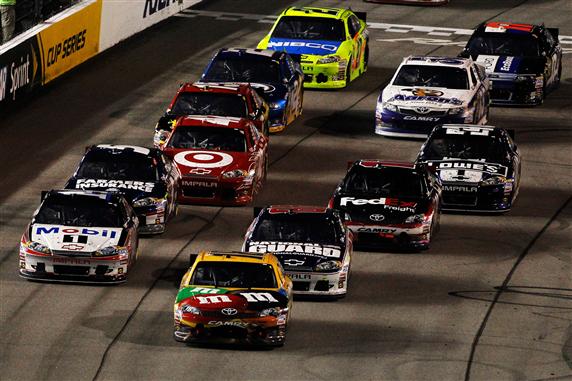 After a pit stop with 14 laps to go, Kyle Busch came off pit road first and never looked back as he went on to score his first win of the season.

Restart Lap 58. A lot of contact on the restart between Kurt Busch and Gordon as Edwards keeps the lead

Lap 207 Stewart pits from the lead to finish the pit stop cycle, handing the lead to Harvick.

92 to go Hamlin and Busch pit

90 to go Stewart and Johnson pit, Edwards misses pit road, Jeff Burton gets into the wall. Caution comes out. Kyle Busch gets the lucky dog. Edwards pits from the lead; Stewart now the leader. Johnson to the tail end of the longest line due to pit penalty as they rolled the tire back instead of carrying it back. a bunch of cars take the wave around. 10 cars now on the lead lap.

81 to go black flag Carl Edwards for jumping the start.

8 to go Kyle Busch has pulled ahead of Earnhardt Jr. while Stewart and Hamlin follow