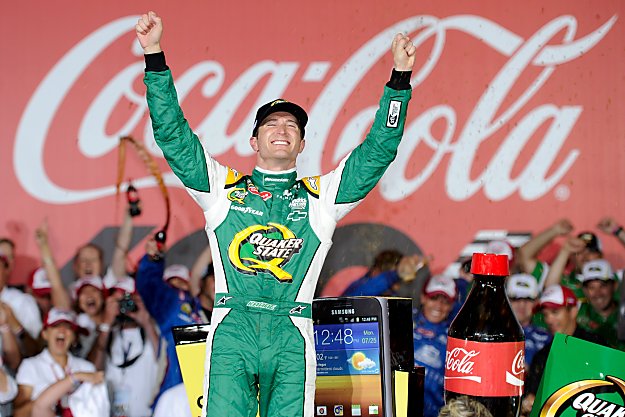 CONCORD, N.C. — As most fans would like to expect, the new Kasey Kahne muscled his way into victory lane in the Coca-Cola 600 on Sunday night, taking NASCAR’s longest, and most enduring race for the third time for his first win with Hendrick Motorsports.

Kahne, who has had a disappointing start to his 2012 season debut with Hendrick Motorsports, crossed the finish line nearly 5-seconds ahead of Denny Hamlin. Kyle Busch was third and series points leader Greg Biffle fourth.

On Sunday, Kahne became the 16th Hendrick driver to take the checkered flag.

As if anyone questioned whether or not Hendrick Motorsports is back on top, Dale Earnhardt Jr. finished sixth, and Gordon seventh in just his third top 10 finish of the season.

Five-time series champion Jimmie Johnson was 11th. Johnson was in contention until the final pit stop when he left his stall with his gas can still attached. NASCAR docked him with a stop-and-go penalty to end his chances.

Danica Patrick, the first woman to drive in the Coca-Cola 600 since Janet Guthrie in 1976, finished five laps down in 30th. However, it was her best finish in three career Sprint Cup races.

“I’m just not great at making the best out of a car that’s not perfect and those long runs really show that,” said Patrick. “But that’s just the nature of where I’m at on the learning curve at this point in time.

I would have like to have been a little faster overall, but I think there were some times in there when it was decent. It was kind of like Darlington [where] there was a certain run or two that felt really good and everything else, you just kind of like let’s work on this and let’s work on that.”

Patrick’s next Sprint Cup race will be at Bristol Motor Speedway on Aug. 25.

For much of this race, it looked as if Biffle had the car to beat. He led 204 laps to dominate early as the race began in the hot, bright sunshine. Once the night cooled off the track, Biffle couldn’t even hold a candle to Kahne.

Earnhardt had hoped to avenge last year’s heartbreaking loss when he ran out of fuel 700 feet from the finish line while leading. Earnhardt came as close to second and was drag-racing Hamlin for the lead on the final restart. Earnhardt, too, couldn’t keep up with his teammate and his winless drought grew to 141 races.

“We had plenty of opportunities,” Earnhardt said. “We made some good adjustments and got the car to fun pretty competitive at the end. We had a little trouble on a pit stop tat cost us a spot in the No. 2 (Keselowski) car under that last green flag run. We had a lug [nut] or something come off on the the left front. But we had a real good speed when it counted in the end. Not as much as the five (No. 5, Kasey Kahne) obviously, but we showed it when we stayed out there with them boys and run in the top three there.”

After both Richard Petty Motorsports drivers, started on the front row, polesitter Aric Almirola quickly fell back and finished 16th. Marcos Ambrose, who started second, broke a wheel hub and ended up 32nd.

There were a total of five cautions for 23 laps. The race also featured 31 lead changes among 11 different drivers.

The NASCAR Sprint Cup Series travels to Dover next weekend, for the running of the FedEx 400 benefiting Autism Speaks.