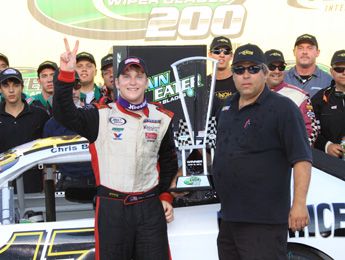 After scoring six victories on the short tracks in the span of two years, Chris Buescher led the final 14 laps on his way to his first speedway victory in the RainEater Wiper Blades 200 at Michigan International Speedway.

“That was so cool,” Buescher says. “Hats off to these guys on pit road. We had great stops and the Roulo Brothers car was awesome right off the truck.”

The race was met with tire problems throughout the day as the most drivers could go on a set of tires was 25 to 30 laps. Buescher played the strategy to perfection as he pitted his No. 17 Roulo Brothers Racing Ford with 25 to go.

Then under a caution with 15 to go for Kevin Swindell getting into the wall, Buescher stayed out and assumed the lead as the rest of the leaders pitted, including current leader Alex Bowman. He was then able to cross the finish line 0.054 seconds ahead of Alex Bowman.

“It was a battle right to the end,” Buescher adds. “I had a close call with that lapped car right there at the end. Thanks to Alex Bowman for running us clean. I really appreciate it.”

Cunningham Motorsports’ Bowman came home second after leading 12 laps throughout the day.  Bowman stated after the race that his team will not be able to make the trip to Winchester Speedway due to lack of sponsorship.

“As of right now, we’re done,” Bowman says. “Winchester is next weekend. We’re trying real hard. Everybody knows funding is the name of the game in racing.”

Points leader Brennan Poole led the first 59 laps, though ran into tire issues and had to make multiple pit stops under green with the first coming at lap 61. He would finish 11th, three laps off the pace. He was able to keep the points lead, now 20 points over Buescher.

Poole wasn’t the only driver who suffered tire problems as so did Coulter, Ryan Reed (who finished 12th), Swindell (finished 14th), Gallagher, Lofton, Buescher and Davis. Though most came home with good finishes after Poole lapped over half the field early in the race.

The race would have it’s big incident of the day on lap three when Nelson Canache spun and both Tom Hessert and Larry Barford Jr. made contact with him afterwards.

“It’s definitely unfortunate for us,” Hessert says. “Looks like the 35 (Canache) car just got into the corner on lap two and spun out. Definatley gives us a tough hit in the points. but it’s a long race so who knows whats going to happen. There’s also a lot of races left this year.”

Under this caution, last week’s second place finisher Chad Hackenbracht would run into problems with the fuel pump and be slow on the apron.

The second caution came out on lap 12 for Jared Marks going for a spin while trying to pass Newberry.

The fourth caution came out on lap 40 when rookie Aleks Gregory would get into the wall.

The next race for the ARCA Racing Series is the 200-lap, 100-mile Herr’s Chase the Taste 200 at Winchester Speedway. ARCARacing.com will carry live timing and scoring for practice, qualifying and the race.