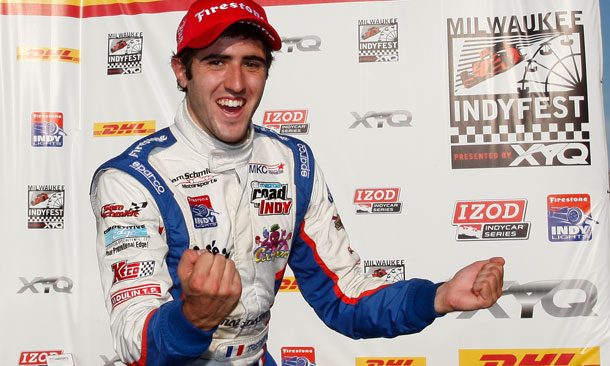 After coming up short two weeks ago at Belle Isle, Tristan Vautier crossed the finish line first in the Milwaukee 100 to give Sam Schmidt Motorsports their 50th Firestone Indy Lights victory. SSM has been around in the series since its inception in 2002, winning five championships.

“It was a great race; we were in control,” Vautier says. “The end was a little harder with the lapped traffic to manage, but awesome day, awesome job from the team. I see my teammate Esteban made it back to the podium so great job from him from sixth and a tough day, so we have two cars on the podium. I didn’t get the 50th pole, but real happy to get the 50th win. What an awesome team.”

Vautier, who started the race from the pole position, held of Team AFS’ Sebastian Saavedra by 0.3370 seconds. It marked the second victory of the season of the season for the driver of the No. 77 Mazda Road to Indy/SSM with Curb-Agajanian car and his fifth top five in six starts.

Meanwhile, Saavedra couldn’t get the run at the end following two restarts.

“For those last 10 laps I was pushing, giving it everything I got,” he says. “The 27 car handled amazing with the Firestone Firehawk tires. I’m not happy because I wanted that first place, but it’s very important points for the championship.”

“The last 20 laps I was flying out there,” Ostella says. “It is so good to finish a race after coming off of two races where I didn’t finish. Being in the top five is amazing and I can’t take the team enough. They did a wicked job. I’ve been sick all day and fallen asleep between every session. The team worked so hard though to give me a good car. It was an amazing race.”

Vautier now leads the points, three points over Guerrieri as the series heads to Iowa Speedway next weekend.