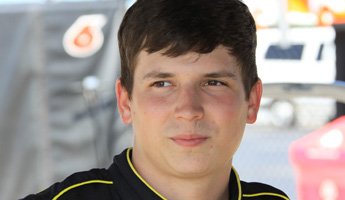 On Monday, Brennan Poole showed why he is the ARCA Racing Series presented by Menards points leader as he drove the fastest lap in the open test at Chicagoland Speedway. He got around the 1.5-mile oval in 30.949 seconds with an average speed of 174.481 mph.

Poole is looking for his ARCA championship in his rookie season as Venturini Motorsports enters their 30th year of competition in the ARCA Series.

“They’re a great family,” Poole said of the Venturinis back in May. “I spend a lot of time with them being here by myself. I don’t know a lot of people so I’m always here at the shop – I’m at the shop right now. It’s just a great family. It’s a family organization – Billy’s uncles, aunts and cousins are all involved in the team. I think that’s what makes them such a strong organization. It’s just been fun working with them. I’m just happy to be a part of it.”

Poole was followed by his fellow rookie teammate Ryan Reed, who got around the track in 31.55 seconds.

Last weekend, Venturini Motorsports fielded a Ford for the first time, with Reed behind the wheel. The partnership came together through Ford’s support of JDRF, an organization that Reed strongly supports.

“I can’t wait to race with the Ford power,” Reed said going into last weekend. “We had a really successful test at Michigan earlier this month and that was the first time I’ve been behind a Ford motor and the team and I saw great performance. And on a personal level, this is a great opportunity for me to show my appreciation for everything Ford does to support JDRF.

“Through Ryan’s Mission and my relationship with JDRF this year, I’ve been able to use my racing efforts to add awareness to type 1 diabetes and help promote early detection of the disease which afflicts millions of people including myself.”

Reed would finish the race at Michigan in the 12th position with teammate Poole in 11th after they both experienced tire problems in the second half of the race.

Buescher and Poole are the only drivers with multiple wins this season as Buescher sits second in points, 20 points behind Poole, after Buescher’s first speedway win last weekend at Michigan International Speeedway.

In the morning session, Poole topped the charts with a lap of 30.949 seconds, followed by Reed, Gallagher, Michael Simko and Canache.