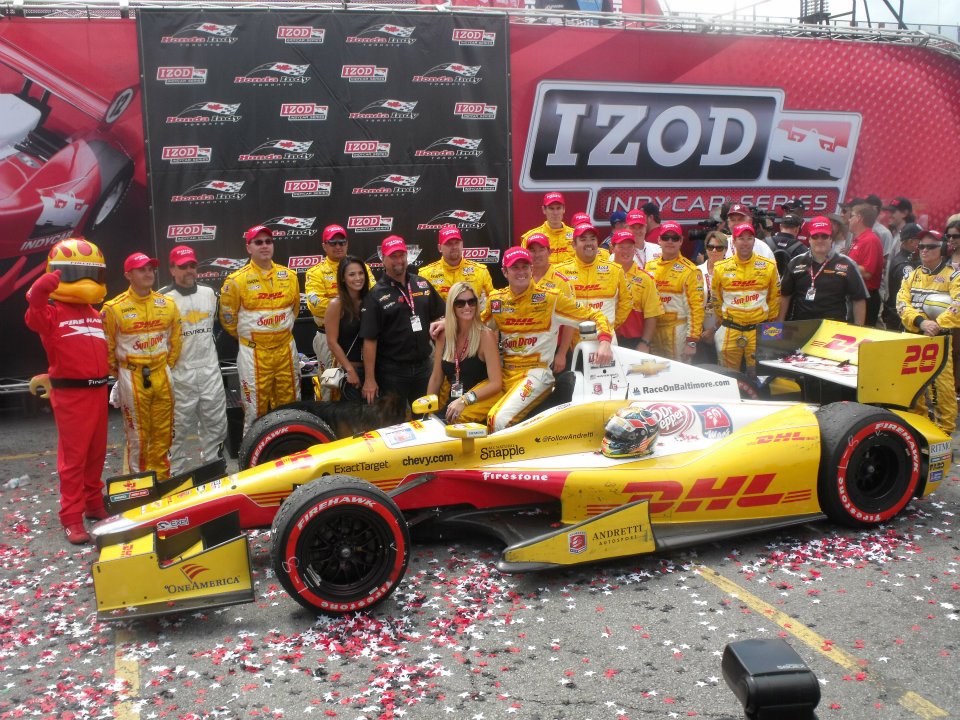 Ryan Hunter-Reay would take the lead on lap 57 after his pit stop, drive away from the field and hold Charlie Kimball off on a late race restart to win the Honda Indy Toronto for his third straight win in a row. Hunter-Reay won the previous two oval races – Milwaukee and Iowa.

“This is awesome,” he says. “There’s a champion run going on right now. I’m a part of it as much as everybody on this team and they did excellent pit stops. They gave me the car to win today. We had it when it mattered again – at the end. We don’t need to win the beginning of the race. We need to win the end and it’s been such a pleasure. I can’t even believe – three races. This is going to take a second to settle in.”

It marked the eight career Indy car win for the American. It also marked Andretti Autosport’s first win in Toronto, though team owner Michael Andretti has won in Toronto seven times as a driver.

Hunter-Reay would take the lead for the first time in the race on lap 49 and lead six laps, before making his pit stop. He would then get the lead back after J.R. Hildebrand pitted on lap 56.

Charlie Kimball would hold off Mike Conway for second for his best career IndyCar finish.

“I know that there was only 25 of us out there, but with the amount of times I passed people there felt like there were about 50 cars, so a lot of credit to the Novo Nordisk Chip Ganassi Racing crew, the 83,” he says. “It was quick and all I had to do was turn and make a couple of moves when they were there. That last restart got pretty busy, but at the end of the day we came home with a clean results and all credit to Ryan.”

Mike Conway would complete the podium with a third place finish for his best finish of 2012.

“The guys at A.J. Foyt Racing have been working really hard all year,” he says. “We’ve been getting in there, getting in there, and this weekend I felt we started off better than we have before, so we just kept dialing in and come warm-up this morning, I was pretty happy with it.”

Tony Kanaan and Oriol Servia rounded out the top five. Kanaan came back to finish fourth after a drive through penalty on lap 22 for hitting pit road equipment.

The first full course yellow would come out on lap 24 for Graham Rahal making contact with the wall on the exit of turn one.

The second full course yellow would come out on lap 79 when Josef Newgarden would try to make the pass on Simon Pagenaud for third, though not be able to clear the corner and stall the car when he tried to stop it. Pagenaud would receive a penalty for blocking.

“I am eager to watch the replay,” Pagenaud says. “I have no doubt on what I did. I think I respected the rule, which is to keep your line. I kept my line, but Newgarden went into a hole where there was no space. If I didn’t move back, he was never going to stop. I had to move back to make sure he wasn’t going to take me out. So, I don’t see why I got penalized.”

“Unfortunately at the end I attempted a pass on Pagenaud that I don’t think I should have tried,” Newgarden says. “I went into the tires and that was the end of our fantastic run today. We showed that despite missing two practice sessions and qualifying in the back of the pack we have the ability to move up the field and threaten for a podium finish.”

Then on the restart with five laps to go, all heck would break loose with seven cars spinning/wrecking in three separate incidents. In turn one, Kimball makes light contact with Sebastian Bourdais, who makes contact with the wall while Ruben Barrichello spins behind them.

“I passed Kimball on the restart….I don’t know what he did,” Bourdais says. “Mistake….completely lose mind. If I didn’t give him the room, it was going to throw me in the tires, so I avoided the contact. I saw him coming so suddenly, I had to open the steering like super quick. I got on the marbles, and there was no way I could make the corner from there. Very disappointing because we should have finished on the podium, whatever place that was.”

In turn three, Franchitti would make contact with Briscoe entering the corner, while Marco Andretti stops mid-corner, collecting Pagenaud and Ed Carpenter. The race would go under full course caution and finish under yellow.

“We finally got the yellow we needed on the last restart,” Franchitti says. “There were massive amounts of marbles and cars going three-wide, and I went for a gap that was closed. It was just one of those things today.”

Championship contender Scott Dixon would have a mechanical issue early in the race on at lap eight, ending his day early.

“I think it was the engine,” Dixon says. “It was definitely something mechanical. I’m not very happy of course, but Team Target will do a lot between now and Edmonton.”

Hometown hero James Hinchcliffe would also be out of the race with mechanical problems on lap 28. It just continued to add to his disappointing weekend after having to change the motor after the first practice on Friday.

“We had a mechanical issue and started losing power in the engine and it’s too bad,” he says. “We started off a bit on the back foot, we lost out pit lane speed limiter so I had to do that first stop watching the speed – the guys had a great stop and I think our tire strategy was good. We got some good passes done early and then that yellow came out, and finally it was a stroke of luck our way and we got up to fourth to there. Another great strategy call by these Go Daddy guys.”

Justin Wilson would also have a disappointing weekend as he would have problems during practice on Friday and then he brushed the wall on lap 66, retiring two laps later as the car continued to slow.

“About half way round that last lap I started to lose power, but it was intermittent, so it would just die and accelerate, die and accelerate,” Wilson says. “Eventually I got to Turn 11 and it died as I entered. As I got to the apex suddenly it gave me full power back. It spun the wheels, the rear came out and clipped the wall and bent the suspension. So I’m very disappointed. We’ve found the part that failed which caused the power loss and we’ll just have to learn from that.

The win for Hunter-Reay would allow him to take the points lead by 34 points as Will Power ran into problems during the race. Hunter-Reay becomes the first American to lead the point standings since Sam Hornish Jr. in 2006.

Power would lead 20 laps early in the event, though damage after getting into the wall and a flat tire would result in a 15th place finish.

“Today’s finish for the Verizon car is certainly a shame because I felt we had one of the quickest cars,” he says. “We did a good job on fuel but unfortunately we stayed out and got caught. I really enjoy racing here, just a tough brake. It is going to be a tight finish with only five races to go.”

The next IZOD IndyCar Series race is the Edmon Indy on July 22 at Edmonton City Centre Airport. The race will be broadcast live by NBC Sports Network at 2:30 p.m. (ET).