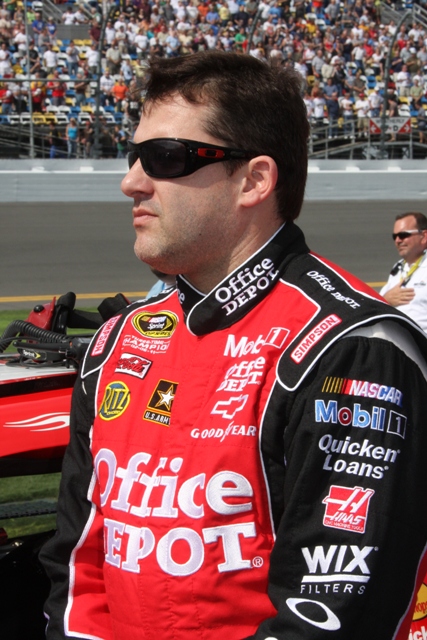 At the start of the race, Matt Kenseth and Tony Stewart started about as far apart as you can at the two and a half mile tri-oval of Daytona International Speedway.

But they wouldn’t finish that way.

Although the ways that they got to the end were totally different and almost as far apart as they were at the start of the race.

Kenseth, started on pole and showed his dominance early on, leading the first 41 laps, when the cars went down pit road for the first time. During those 41 laps Stewart improved only a little from his 42nd starting spot, which was earned after his orginial time, a time that would have given him the second starting position, was disallowed after his car was found to be outside the rule book.

“I’m really proud of all the work that the crew has done this week,” Stewart said to TNT reporters after the race.

It wasn’t until 11 laps to go that the two cars of Kenseth and Stewart finally caught up to each other. Stewart had been working his way through the field all night, and after a caution period and pit-stops he found his way to the front of the pack.

Kenseth meanwhile, had dominated the night with his Roush-Fenway partner, Greg Biffle.

When “the big one” a wreck that the ristrictor plate racing tracks of Daytona and Talladega are known for, that involve multiple cars, happened on lap 10, it set up the final two car battle between Kenseth and Stewart for the win.

After a lengthy clean-up, the race had three laps left to go.

Stewart moved low to block the progress of Kenseth and Biffle while Kahne stuck around on the outside lane.

“I thought I’d be able to stay with Greg [Biffle] for that last lap and a quarter,” Kenseth said after the race.

Coming into turns three and four, Kenseth and Biffle had split up and the pack had caught the back of the leading four cars. As Stewart and Kenseth left turn four, Biffle and Kevin Harvick got together setting off a second “big one,” this time Kahne and Biffle were caught up in the wreck.

During that time, Jeff Burton, who had been running in fifth behind the top four, was able to get by Kenseth for second. But that was as far as he would get.

“I don’t remember much about that last lap,” Stewart said after the race.

When the checkered and caution flags waved it was Stewart that claimed the third win of the season.

“Just a weird day,” Stewart said about his back of the pack starting position and drive to victory.

As the wreck happened behind them, Burton stayed in second and Kenseth finished third.

Much of the race went caution free, with the first half going by without incident. After the second green flag stops of the day was when the first incident of the race occurred when the No. 22 of Sam Hornish Jr. blew a tire and wrecked.

Right before the third green flag stops of the night is when the cautions really started to take place and pick up. After Johnson spun while trying to get onto pit-road the next 30 laps all featured short green flag runs.

“We got really fortunate not to have any of those close calls,” Stewart said about surviving the race and being able to capture the win. His fourth points paying win at Daytona.

Joey Logano and Ryan Newman finished fourth and fifth to round out the top-five.

Kenseth didn’t get the win, but he holds onto the points lead.