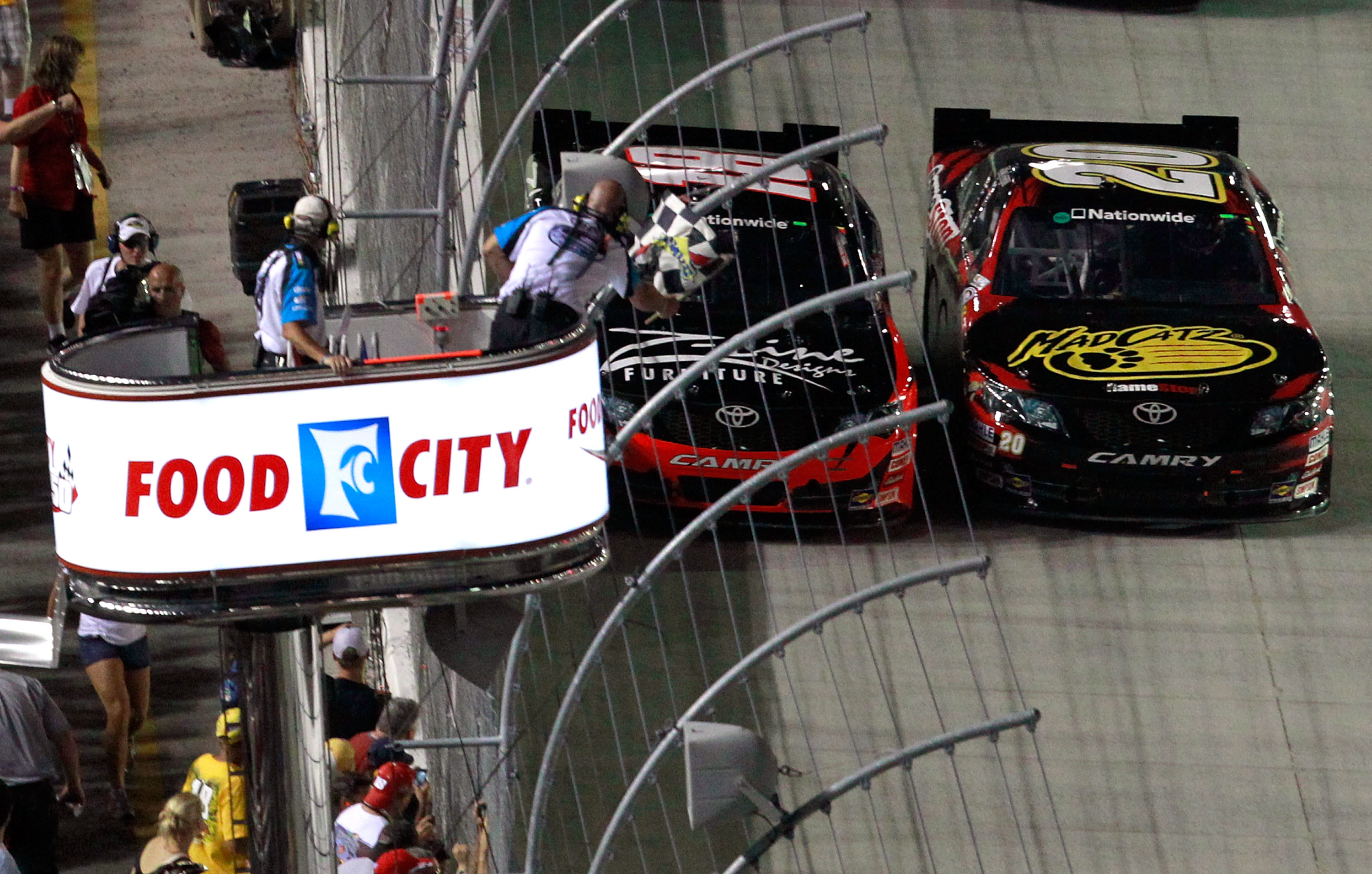 It’ll be somewhat of a race of firsts this weekend when the NASCAR Nationwide Series returns to Bristol Motor Speedway for the annual night race.

To start off, the Food City 250 will be the first time that cars, have raced on the re-vamped new-old Bristol.

It’ll be the first time in three races that Kyle Busch won’t be returning as the previous race winner, since Elliott Sadler was able to take the win back in March.

Finally, this Friday’s race will be the first time that Justin Allgaier could go to a track, calling himself a winner in 2012.

All three first time events could create for a pretty heavy fight under the lights in Tennessee. All three elements adds a little something unique to the track  and this Friday’s event.

Starting off, the fact that Bristol Motor Speedway was “fixed” after the March race will play a huge factor. In the spring race, drivers had the option of trying to work the high line into the race, if they chose.

However now that the progressive banking that was worked into nearly every Motor Speedway Inc. track has been taken out and Bristol resembles it’s former self, with just one line of traffic working on the bottom. Drivers might venture into the high line, but all the grip will be on the bottom line.

The Camping World Truck Series race on Wednesday was the first national circuit to feature racing on the new-old Bristol, but the Nationwide Series will be the first time that 43 stock cars have taken the track for a race.

When the Nationwide series returns to the the re-vamped Bristol there will be a new name atop the most recent NASCAR Nationwide Series winner list at Bristol. The last three times the Nationwide Series visited the track it was Kyle Busch that could call himself the most recent NNS driver to concur the track that is known as the “world’s fastest half-mile,” but that was taken away in the spring race when Sadler was able to take the victory.

Then Sadler was finally able to breakthrough with a win, while holding onto the points lead, when he won at Iowa Speedway in August.

Coming back to Bristol, after doing fairly well on the short tracks all year, it could be a chance for the Richard Childress Racing driver to extend his points lead even further as the NNS season starts its final stretch.

Even though Sadler was able to break the Busch streak at the track, Busch will be back in his team owned No. 54 this weekend trying to go for a fourth win at the track in the last five races. When it comes to Bristol Busch is always a person to look out for, no matter what car he is driving.

The last time, besides March, that anyone not named Busch, won at the track was in the spring race of 2010, when Justin Allgaier was able to score his first career victory at the half-mile Tennessee track.

When Allgaier comes to Bristol this Friday, he will enter the race being the most recent NNS winner on the circuit. After pulling off a last lap pass on Jacques Villeneuve at Montreal, Allgaier was able to pilot his No. 31 Turner Motorsports car to victory, his first win of the year.

Allgaier could take that confidence into Bristol and pull off back to back wins and start a late season push for the championship.

Other drivers to watch would be Joey Logano in the No. 18  of Joe Gibbs Racing. When Busch won all those races he was driving a Gibbls Toyota, and Logano has been pretty stout in the NNS series this year, leading all drivers with four wins.

Sam Hornish Jr. has worked his way into third in the championship standings and he hasn’t finished outside the top-10 in a race in a while. Coming to Bristol he can use the notes provided by his teammate, Brad Keselowski.

Keselowski hasn’t won at Bristol in the NNS series, but he is the most current winner in the Sprint Cup Series at Bristol. So the Penske duo could be a team that walks away from Bristol with the victory.