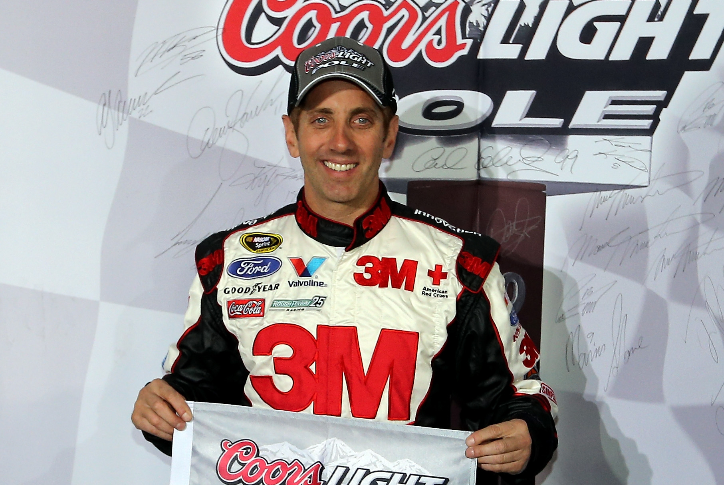 It was a fast night at Charlotte Motor Speedway and Greg Biffle was the fastest of them all on Thursday night.

Setting a lap averaging 193.708 mph around the 1.5-mile Charlotte Motor Speedway, Biffle set the benchmark lap that the rest of the field would be chasing in the qualifying session.

As more and more cars took the to the track, Biffle’s lap became harder and harder for them to top. His biggest challenge, however, came at the end of the qualifying session when Mark Martin missed Biffle’s fast lap by 0.050 seconds.

Denny Hamlin, who was the fastest car in the one and only Sprint Cup practice session on Thursday, had the benefit of the coolest and fastest track conditions, but was only able to qualify his Joe Gibbs Racing Toyota in the tenth starting position.

When it was all said and done, Biffle found himself with the number one starting spot as well as the CMS track record.

“I thought nobody would get there tonight,” said Biffle regarding his track record lap. “I didn’t think it would be me.”

The pole marks the first time Biffle has started from the pole position in his Sprint Cup Series career. The pole is also his third of the 2012 season, and the 12th in his career.

“It feels so good. We’ve been working so hard. We’ve been kind of down in the dumps a little bit because we haven’t started out this Chase as strong as we’ve been all season.

“We’ve been at six race tracks over the past two weeks between testing and everything we’re doing racing. Just excited for tomorrow night.”

While Biffle won the pole, there were many story lines to follow during qualifying.

Substituting for Dale Earnhardt Jr., Regan Smith qualified the No.88 in the 26th position. In Smith’s place behind his normal No.78 car, Kurt Busch will start the race from 21st.

Making his return to NASCAR, AJ Allmendinger qualified the Phoenix Racing No.51 Chevrolet in the 38th position.

Joe Nemechek, Scott Riggs, Josh Wise, and Cole Whitt were the drivers who failed to qualify for Saturday night’s race.