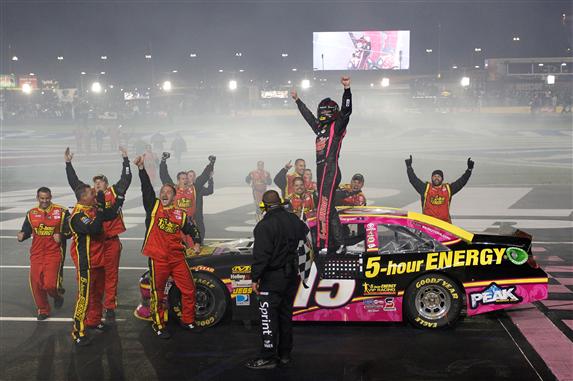 The way the 2012 Chase for the Sprint Cup has started, you would have expected either one of the top-three drivers in the standings to be contending for the race win.

For the majority of the race, you would have been right as Brad Keselowski, Jimmie Johnson and Denny Hamlin dominated the first 300 laps of the 334 lap event.

However, as is the case at many of the 1.5-mile tracks this season, fuel mileage came into the equation and added a twist to the race’s end.

After running out of fuel prior to the final round of pit stops, Keselowski went from racing for the win and extending his points lead to making the most of a bad situation and maintain their points lead.

While Keselowski battled for a top-10, his championship counterparts, Johnson and Hamlin, looked to be in contention for a win, and gain on the points lead. But, only one would have a chance at the win once the race wound down.

Stretching his fuel on the previous round of stops, Clint Bowyer had nearly a two-second lead over the second-place car of Hamlin as the race neared its closing lap.

Knocking down the gap each and every lap, Hamlin’s chances at victory were looking brighter while Johnson’s turned bleak as fuel became an issue for his Chevrolet.

With the laps winding down, Bowyer drew closer to his third win of 2012, but Hamlin wasn’t about to let him go without a test in the closing laps.

Through lapped traffic, the No.11 closed on Bowyer’s lead with under five laps to go. It turned out to be too little, too late as Bowyer went on to claim his third victory of the 2012 season by winning the Bank of America 500.

By winning his third race of the 2012 season, it marks the highest season win total for Bowyer in his seven year Sprint Cup Series career, something he credits to his crew chief Brian Pattie.

“I just hold the wheel and turn left. Brian Pattie and the team he’s assembled around me is second-to-none.

With the win, Bowyer moves to fourth in Sprint Cup points, 28-points behind leader Keselowski heading into next weekend’s race at Kasnsas Speedway.

“You’re not going to win them all,” said Keselwoski. “We didn’t lose too much. We got eleventh out of the day. From cautions at the beginning to lack of them at the end, we still put out a respectable effort.

“Lead a bunch of laps which makes up for not having a top-10, but still would like to get those other three spots.”