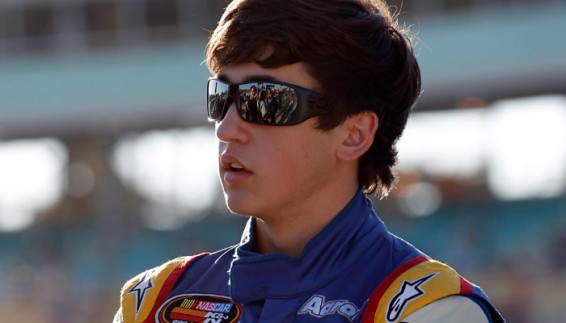 Chase Elliott is making his assent up the NASCAR ladder.

After racing full-time in the NASCAR K&N Pro Series East in 2012 where he picked up a win at Iowa Speedway, Elliott is jumping up to the Camping World Truck Series for nine races in 2013.

To go along with the jump to trucks, Elliott (16) will race five ARCA Racing Series presented by Menard’s events driving a car affiliated with Hendrick Motorsports and sponsored in both series by Aaron’s.

In the past, the chance to race in one of NASCAR’s top-three divisions (Sprint Cup, Nationwide and Camping World Truck) wasn’t available for a 16-year-old like Elliott. However, a change in the minimum age restriction in the Truck Series to 16 at tracks less than 1.1-miles in length as well as road courses.

In compliance with the rules, Elliott will make his first Truck Series start of the season at Martinsville Speedway on April 6 driving a truck affiliated with Hendrick Motorsports and fielded by Turner Scott Motorsports, the team which fielded trucks for the 2012 series champion James Buescher.

In those races, Elliott is expected to race the No.94 truck which is the same number that his father (Bill Elliott) ran in the Sprint Cup Series from 1995-2000 when he drove for his self-funded race team.